If you’ve ever walked the streets of Chinatown on a Friday or Saturday night (that is… when the city is not struggling against the polar vortex!), you’ve probably paused at some point to watch in awe a musician beating at drums made of plastic buckets, paint cans, and maybe even a 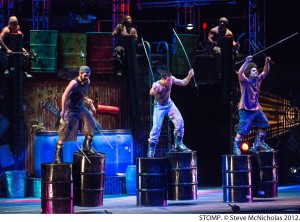 Now set this on the stage.

STOMP, an award-winning production originating from London, returns to bring its intense inventive percussion to DC’s National Theatre.  The show sets a cast of eight musicians on an industrial-inspired stage, where they create rhythm and sound from everyday objects — think: brooms, trash cans, sinks and plastic bags — and match it to expertly-synced choreography.

The only thing missing from the ruckus (and well, to some, it may sound like just that) is a storyline. But the occasional comic relief — generally provided by one clownish character who never seems to get his way — is enough to get every kid in the room giggling and begging for their own set of drumsticks… obviously available for sale at the theatre.

STOMP plays at a limited engagement at National Theatre through February 9th.