Mother Russia has put out her welcome mat this year, but not everything is centered around Sochi.  There was a rally for the Russians right here in DC Tuesday night as the city’s out and about showed up to celebrate Mari Vanna DC‘s One Year Anniversary.  The three-level restaurant, which opened in January of last year, serves up authentic, home-style Russian cuisine in a “tea party-meets-grandma’s house ambiance.” 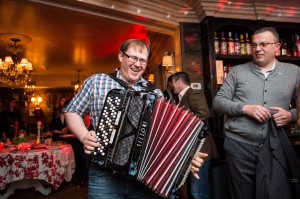 An in-house accordionist kept the atmosphere authentic until resident DJ, DJ Freddy, turned up his tunes.

And in case you’re worried about any possible slight to Sochi… Mari Vanna plays tribute to the 2014 Winter Olympic games by adding three traditional Sochi dishes to their menu and kicking off the games with a happy hour on 2/7 from 6 – 9pm which offers all sports fans a complimentary vodka shot and free bites from a pirozhki tasting station!

Previous Post: STOMP, A Show of Sounds, Now at National Theatre
Next Post: Single, Taken… or Unsure: What to Do on Valentine’s