If you’re looking to see a show like none you’ve ever seen before, hurry to get your tickets to Emmy Award® winner John Leguizamo’s sixth one-man venture Latin History for Morons during its short, three-day run at National Theater before it’s gone.

Raunchy and rude, yet also poignant and tender, the one-man show earned Leguizamo a Tony Special Award during its hit 2018 Broadway run. Inspired by the near total absence of positive Latinx representation in his son’s American history class, combined with racist bullying at the school, the Columbian-born Leguizamo embarks on a frenzied search to find a Latin hero for his son’s academic project. From a mad recap of the Taino, Incan, and Aztec empires to stories of unknown Latin patriots of the Civil, Revolutionary, and World wars and beyond, Leguizamo breaks down the 3,000 years between the Mayans and Pitbull into 110 irreverent and uncensored minutes in his trademark style. 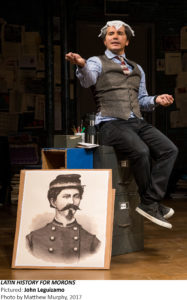 In Latin History for Morons, Leguizamo’s frenetic energy is tempered with paternal anxiety. He slings bawdy humor and political stilettos, 80s jokes and sly impeachment references, age and rage, even a Monty Python rip-off, and above all fearlessness.  He’s not afraid to drop an f-bomb or admit he sees a therapist (his impression of which is a comic highlight), or bust out “some of the sexiest dances the world has ever known: Tango, cumbia, cha-cha-cha, mambo, samba.” If exaggerated at times, the pathos comes from the heart.

Leguizamo’s breakneck syllabus is salacious and prompts out-loud laughs for a wide audience (maybe not all at the same time, and definitely not for those with prudish ears), but also brings real emotional weight. The rollicking comedy assault delivers hard truths with a lollipop of self-deprecation and empathy, opening the audience to the comedian’s message. He doesn’t hold back his real grief at the self-loathing and fear systemic racism endow upon the Latin American man. You could have heard a pin drop in the theater with his line: “We are so American it hurts.” 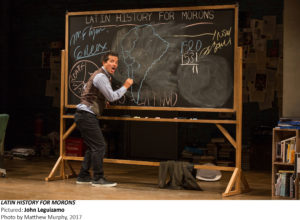 You’re the moron, but you don’t have to be. The world has finally caught up to what Leguizamo has been burying in his comedy for years, and this is his moment.  Get yourself to class now. You’ll definitely learn something.