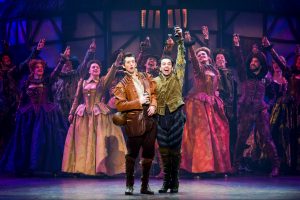 If you love Shakespeare and you love musicals, then Tony nominated Something Rotten! at the National Theater is ripe for your enjoyment. Sizzling with bawdy puns and egg-stravagent dance numbers, brother sister Karey and Wayne Kirkpatrick’s book, music and lyrics are a valentine to Broadway and literature.

Sly winks to the pantheon of great musicals fly thick and fast, and make you feel clever when you place them, but not stupid if you miss them, for they are far too thick on the ground to catch them all. Personal favorites included Annie’s It’s A Hard Knock Life and several from The Sound of Music. The same is true of Shakespeare – sonnets and soliloquies pepper the dialogue as Portia, Shylock, 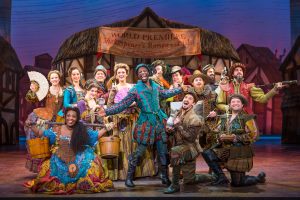 Falstaff, and Toby Belch tread the boards. And if you don’t love the Bard, you’ll still find your toe tapping to Rob McClure’s impassioned rendition of “God I Hate Shakespeare.”

Silly and exuberant from the opening number, “Welcome to the Renaissance,” dancers in doublets are dropping some couplets about the sunny side-up of the 1590s. Theatrical brothers Nick and Nigel Bottom (fiery McClure and soulful Josh Grisetti) crave a hit, a payday, and perchance to dream of one-upping their rival Will Shakespeare. Romeo and Juliet is the toast of the town, and when the Bottom billing of Richard II is upstaged again by their

adversary, Nick hatches a plan to steal Shakespeare’s greatest play from the future via madcap Soothsayer Thomas Nostradamus (played hilariously over the top by Blake Hammond). Nostradamus promises Nick will dazzle the world with The Future Of Theater: The Musical! Without a doubt the most spectacular number in the play is the fortune teller selling the idea of “A Musical” to skeptical Nick, replete with tap dancing, high kicks, feather fans, and jazz hands. Perhaps Nostradamus missed breakfast, but when peering into the future for Will’s Greatest Hit he mistakenly divines the Danish Hamlet as an omlette and a danish, setting the stage for the audience to enjoy the startling number of breakfast puns seeding 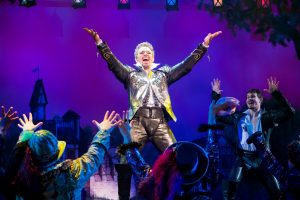 The entire ensemble breaks an egg with strong vocal performances. Adam Pascal’s Will Shakespeare steals the script (literally) as a sexy, preening, scheming Billy Idol-style poet, demanding swoons, poaching the best yolks, and hamleting it up at ‘Shakespeare in the Park.’ I learned the true depths of my Shakespeare nerdiness as my cortex snagged reference after reference. Pascal handily earns his rock god status, sizzling in Gregg Barnes’s racy leather jackets and vocally dominating “Will Power” and “Hard to Be the Bard.” He is the Will with the skill to thrill you with his quill. Autumn Hurlburt shines 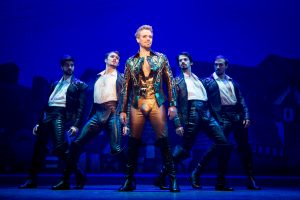 Something Rotten! is as campy as candy floss. Laugh-out-loud comedy abounds, no matter where 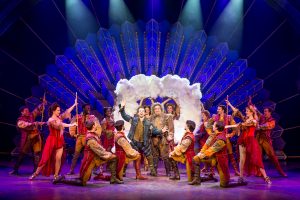 on the scale from literary wit to sex gags your sense of humor hits the funny bone. Where the comic invention wears thin, the fast and fizzy staging more than makes up for it with spectacular dance numbers by Director and Choreographer Casey Nicholaw (who also staged Book of Mormon). Scott Pask’s Elizabethan sets are the perfect foil to the three C’s of Barnes’ costuming: Color! Convertible! Codpieces! 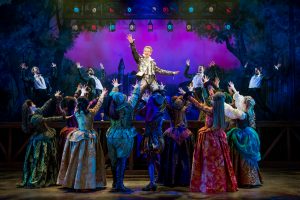 If music be the food of love, come hungry . . . for fluffy omlettes. The flagrant merriment of Something Rotten! is a perfect cure for gruel-ing February. To thine own self be generous – this is the spoof you deserve after your wonky day of trying to keep the government open. Dig into this spectacle before it fades into history. This show is hard to beat (see what I did there?)!

Something Rotten is playing at The National Theater (1321 Pennsylvania Ave. NW, Washington, DC 20004) through February 18, 2018. Running time: Two and a half hours with intermission. For more information call 800-514-3849 or visit www.thenationaldc.com.

*Images from the Something Rotten! National Tour, credit Jeremy Daniel and Joan Marcus.