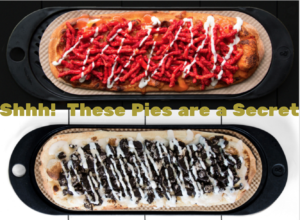 Secret pizza?  The Georgetown location of &pizza is currently offering a secret menu of “snackable” pies. But not only are they only available through the end of June, you can’t order them unless you go incognito (on your browser, that is!).

“The Oreo” and “The Cheeto” are on a new gimmicky menu that cravers can access only by ordering at incognito.andpizza.com from a concealed browser.