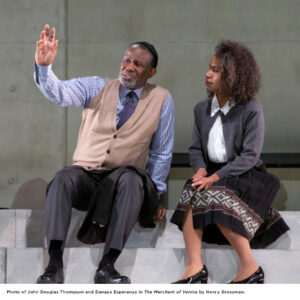 Many believe that including The Merchant of Venice in this Shakespeare Theatre Company season is an odd choice. What the Bard wrote as a comedy is now turned into tragedy due to racial and religious prejudice. But that seems to be happening to a lot of things today. Perspective change is powerful, but in not tossing it aside, this season’s Merchant offers the opportunity to mature its message and amplify new themes.

Keeping with STC’s habit of using old-world language in more modern settings, director Arin Arbus takes a 16th Century Venetian atmosphere and breathes a little trendiness and tech into it.

Shakespeare’s story is, generally, about a man, Bassanio (Sanjit De Silva), who has already borrowed much from his wealthy merchant friend Antonio (Alfredo Narciso) but has a scheme to be able to pay it all back — though he needs more seed money, of course. He wants to woo the fair heiress Portia (Isabel Arraiza), who has her own entanglements to thicken the plot. 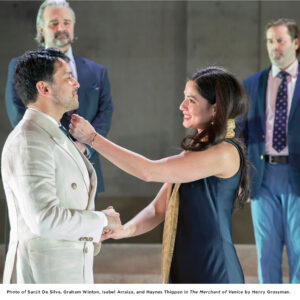 Antonio, who would give Bassanio anything — if he had it — does not have the capital at the moment as it is tied up in other ventures, but he’ll allow his friend to use his name as credit with a money lender. The problem is that the moneylender, Shylock, has a feud with Antonio, so repayment won’t be as easy as anticipated.

Shylock, played by Tony Award nominee John Douglas Thompson making his STC debut, obviously cannot portray merely the bloodthirsty Jewish cur and comedic villain that Shakespeare intended him to be. Instead, due to Thompson’s utter mastery of the character, Merchant’s most intense moments now convey the extremely violent and difficult realities of where prejudice has led modern society. 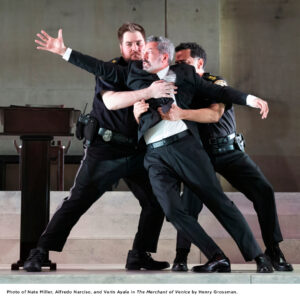 Even those familiar with this iconic play will have moments of shock… and awe.

It is easy to see Merchant as a tale of giving and taking — and expectations — but STC’s modern Merchant of Venice is also a tale of the joys and perils of devotion. Devotion to religion, to family, to love, to money, and to the law. Each character has their “bond” which they won’t break or veer from, and it is in this rigidity that the modern story is so compelling, and so very significant today.

Shakespeare Theatre Company’s The Merchant of Venice, a co-production with Theatre for a New Audience, has been extended through April 24th at the Michael R. Klein Theatre at the Lansburgh. Tickets for the now extended run can be purchased here.