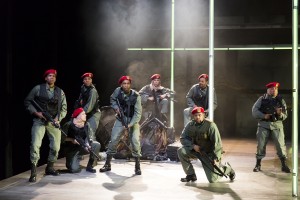 Remember when you were a kid, and you’d hang your head off the side of the bed upside-down to see the world from a different perspective? You’d notice things you never saw, or never saw quite that way before. Liesl Tommy’s direction of Macbeth at the Shakespeare Theater Company similarly inverts the familiar script, transporting Macbeth from Scotland to an unstable African dictatorship, showcasing the timelessness of political ambition in a realistic contemporary conflict.

Macbeth’s salacious greed for power lends itself to “ripped from the headlines” interpretations, and Tommy’s is no exception. She has cleverly recast the witches (David Bishins, Tim Getman, and Naomi Jacobson) as Western undercover operatives manipulating Macbeth into destabilizing the political structure of his country to exploit its natural 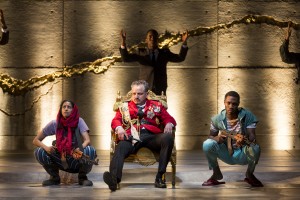 resources. This greed is hauntingly emphasized by John Coyne’s stark but striking set of tall granite walls cut with a scar of gold. The conspicuously Caucasian witches stir their pot, not with eye of newt, but with a “fake news” prophesy, wire-tapping, and hacking. The civil war has familiar contemporary notes, such as bloodthirsty child soldiers (played savagely by Brayden Simpson and Anu Yadav) and brutal “necklace” execution. Horrors are emphasized less by soliloquies, and more when characters pause to snap a cell phone picture. Cocaine, suitcases full of money, dark sunglasses, and slick power point presentations drag the story along a few hundred years.

It’s a bold interpretation of Macbeth that amplifies the minor character Hecate, goddess of the underworld and “boss” of the weird sisters, to greater primacy than Macbeth and Lady Macbeth. Having said that, Tommy’s take on Hecate (played with sinister cool by Stephen Elrod) – a character wholly unnecessary to the play (and, many argue, one shoe-horned into the script by a someone other than Shakespeare) – is one of the performance highlights. The character 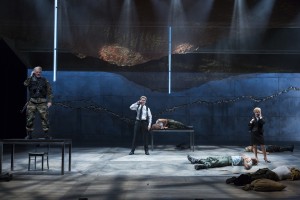 Hecate serves to underscore the philosophical question: Is Macbeth entirely to blame for his own downfall? Parallels to contemporary American electoral-political questions cannot be overlooked.

Ultimately, however, the play doesn’t work. This production has too many crafty contemporary allusions that distract from the main emotional events. References to African civil war, Russian political manipulation, and subversive Western black ops noisily bump against each other, collectively drowning out the human tragedy at the heart of Macbeth. People want an evil Macbeth and Lady Macbeth, not gimmicks.

I left hungry for more of Nikkole Salter as Lady Macbeth. She enters with a bang, restlessly solo-drinking in a Harvard t-shirt, alone with the remote and the wails of spectral unconceived child. But her leashed intensity never unfolds into malevolence or madness. Her ascent is too cool and polished, her descent too abrupt and quiet.

Jesse J. Perez’s Act I Macbeth seems more pawn than profiteer. He is hazily ill-defined. Perez excels in the freeze-frames, where the tableau 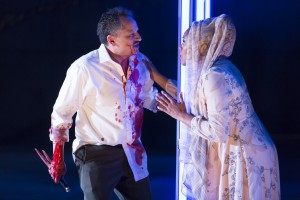 pauses, and we feel the white-hot internal turmoil writhing within, even as Macbeth turns a cool face to the world. It is in Act II that Perez hits his stride as the foul dictator spinning more and more out of control, and turning outside the establishment to carry out his bloody hamster-wheel of assassinations.

Where the play succeeds is with its strikingly visual staging. Multiple masterpiece snapshots blow it out of the water. The battles scenes are gory and horrific. The coronation of Macbeth is an optical smorgasbord, with the new ruling couple emerging from a luxury sedan to a discomfort-causing signature salute. Kathleen Geldard’s stunning costuming hits its apex with Lady MacBeth’s red coronation gown and crown. 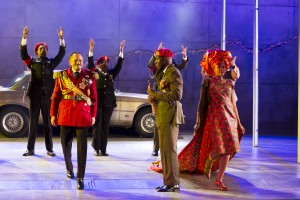 And I’ll only say that Macbeth’s ultimate downfall is gasp-inducing.

Gimmick may trample pathos at times, but STC’s Macbeth is a strong production, turning things upside-down to showcase something familiar in a whole new way. Whether you like it or not depends on how you like your Shakespeare, but at a minimum, Tommy’s production will make you think hard about current events through the prism of the Bard’s timeless tale.

Macbeth is playing at The Shakespeare Theatre Company’s Sidney Harman Hall (610 F Street NW, Washington, DC 20004) through May 28, 2017. Running time: two hours and fifty minutes with one fifteen minute intermission. For information or tickets, call the box office at (202) 547-1122, or click here.