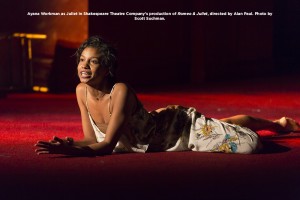 If you’ve ever wondered what the CW version of Romeo and Juliet set in a Staten Island banquet hall might look like, hie thee to The Shakespeare Theater Company’s production, playing at the Lansburgh Theater through November 6, 2016.

Under the direction of Alan Paul, Shakespeare’s timeless tragedy accentuates the impulsiveness, naiveté, fulsomeness, and passion of youth. I don’t feel like I’m giving 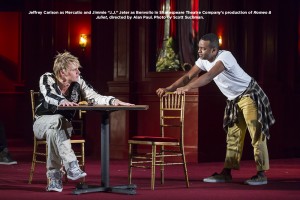 anything away here when I say our lovers, played by Andrew Veenstra and Ayana Workman, are tragically star-crossed. Paul deftly captures the innocence and ignorance of teenagers in love with a thumping contemporary interpretation – the unraveling of Justin Bieber and Selena Gomez, with a darker, more final, conclusion. In reminding us that Romeo and Juliet are barely out of baby fat, Paul is handily supported by Jen Schriever’s adept lighting and Kaye Voyce’s costuming – highlighting the shadows of a bony adolescent arm, or garbing the woman-child in frothy quinceanera style. Once you can see past the opulent crimson velvet wall of Dane Laffrey’s set, you see two children playing at being adults, with tender 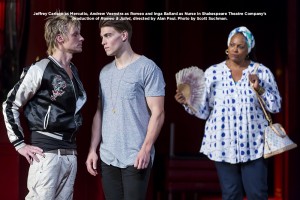 and tragic consequences. Particularly affecting is the simple wedding ceremony.

The kitschy approach avoids being annoying because of the production’s self-awareness. There’s a sense of winking at the OC version of Romeo and Juliet. Paul accentuates the oft-overlooked humor in Shakespeare’s play. Jeffrey Carlson’s fabulous and flamboyant Mercutio steals the show, and his death as a result of Romeo’s carelessness was truly tragic. Inga Ballard as the Nurse was a funny and insightful standout.  Keith Hamilton Cobb and Judith Lightfoot Clarke are a touching Lord and Lady Capulet as they struggle to connect with, and parent, Juliet.

If the performance lacked some emotional wrench, it delivered on funny and wry. There were poignant moments, particularly the Act One fade-out of an ignorant Juliet, oblivious to the 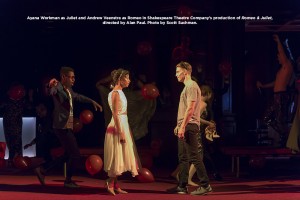 fate barreling down on her. But I didn’t leave tearful. Still, it was a fun and lively reinterpretation of a classic that’s been imagined every which way. The cast was strong. The visual imagery rich. Why not check out this Very Special Episode?

Romeo and Juliet is playing at The Shakespeare Theatre Company’s Lansburgh Theater (450 7th Street, NW, in Washington, D.C.) through November 6, 2016. Running time: Two hours and forty minutes with one intermission. For information or tickets call the box office at (202) 547-1122, or click here.

Previous Post: Zombie Prom: The 1950s Musical — It’s Not Dead…Or Is It?
Next Post: Shopping for Charity with Carmen Marc Valvo