I thought I was going to get to be on hand when Mayor Gray finally conceded to the Democratic nominee for DC’s next Mayor (no call after this week’s upset in the primary).  This Leadership event was loaded!

Walking down the stairs into a JAMPACKED reception, the first thing I noticed were “Class of 2014” signs.  I thought I had accidentally stumbled 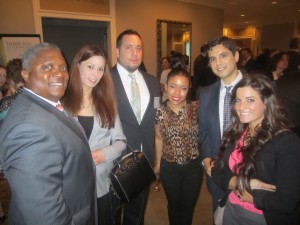 upon a graduation party — and I guess in many ways I did.  And then I literally bumped into the Democratic nominee for DC Mayor, and Leadership Greater Washington 2014 “class member,” Muriel Bowser. And I saw former DC Chamber of Commerce President Barbara Lang.  And the Eugene & Agnes E. Meyer Foundation’s Julie Rogers (Both Barbara and Julie would that night receive the 2014 Innovative Leadership Award).   And just before dinner, in walked DC Mayor Vincent Gray…

Thursday night was Leadership Greater Washington’s annual celebration of innovative leadership and community partnerships — dubbed the Spring Event, but truly more of a local power party — at the Fairmont Hotel, where top community leaders from the business, government, non-profit, technological and creative fields within the Greater

Washington region all come together to network, break bread and give a well deserved pat on the back.

Thursday evening’s event, attended by nearly 500, specifically looked to laud beyond-the-box thinking, and brought together the big names needed for DC to do it.  It was high energy and infectiously entrepreneurial, honoring two Washington icons and applauding a winning community partnership — this year voted on by the membership — between Community of Hope and CareFirst BlueCross Blue Shield. 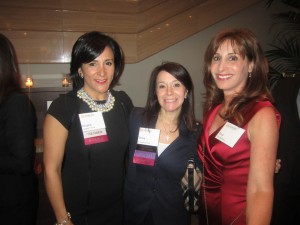 emcee Rebecca Cooper invited both Gray and Bowser on stage.  With Gray yet to concede and Bowser visibly sore about his snub (Washington Business Journals’ Douglas Fruehling reports she did not stand upon his entering), that short hand shake was a tense one.

So what did the graduating Class of 2014 learn?  Sometimes being a leader isn’t just about shrewdness, strategy and support, but also to just know when to shush and smile.

Previous Post: Miss America and Emerging Leaders Off to a Running Start
Next Post: Sir Richard Branson, Guest of Honor at the British Ambassador’s Residence