This year marked the 100th year of the White House Correspondent’s Association, but I didn’t see a lot of commemoration for the anniversary… or as many celebs attending as usual.  Even so, the festivities surrounding the main event were as numerous and notable as ever.  And I was honored to have been invited by Thomson Reuters to have an intimate look inside the media and information firm’s biggest #WHCD weekend events!

rooftop of the Hay Adams Hotel.  Buzzing about these events with TR’s Digital & Social team really made my WHCD experience — apparently just a bit shy of dinner host Joel McHale‘s… which he called “one of the coolest things that has ever happened to me in my whole life.”

The TR dinner pre-party was particularly hot for sports stars.  Indianapolis Colt’s QB Andrew Luck and Minnesota Vikings’ Running Back Adrian Peterson were some of the gathering’s most sought after guests.  Also dipping in and out of the room — and congregating nearby in the hallway — were a variety of Hollywood stars, like Diane Lane and Lupita Nyong’o, Scandal’s Tony Goldwyn, Dallas’ Patrick Duffy, Robert DeNiro, and pretty much the 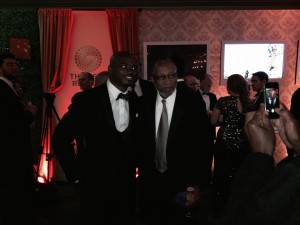 entire casts of VEEP and House of Cards.

(Cynthia Nixon did not stop in.  We also heard (firsthand!) that she did not enjoy taking pictures with fans.  We are not surprised.

Tim Daly did stop by.  We also saw (firsthand!) that he does enjoy taking pictures with fans.  We are not surprised.)

But when the dinner was over and the really nasty one-liners had been spent at just about everyone’s expense, there was still a Sunday morning 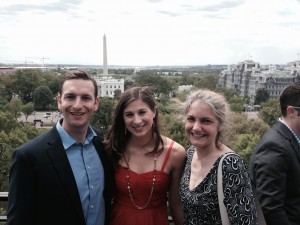 brunch to look forward to.  And TR knows how to brunch!  Atop the Hay Adams Hotel overlooking the White House, some 400 guests stopped in to enjoy breakfast made by some of the city’s (and Bravo TV’s) most famous Top Chefs: Mike Isabella, Spike Mendelsohn and Bart Vandaele.

Supposedly, the dishes were politically inspired — odd that almost all of them featured duck… or egged duck — but a casual buffet of breakfast staples (and a fully stocked bar!) also satiated the crowd as it started to 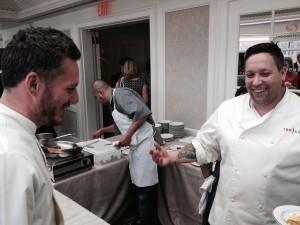 wind down from the weekend’s frenzy of fancy fetes and dressed-to-the-nines dinners.

Some favorite moments included listening to Isabella gently try to explain his dish to one woman when she asked for an explanation of “scrapple” (awkward!), learning a new way to “selfie” from Vandaele (genius!), and Mendelsohn “making it rain” (napkins) on Isabella’s cooking station.

While the brunch was mostly attended by TR journalists and news personalities, we did spot Albright Stonebridge Group’s Ben Chang, Hogan & 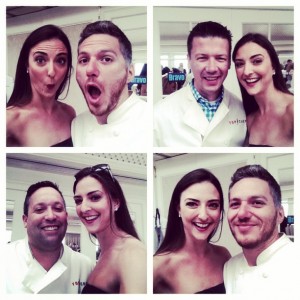