“The District of Columbia is not a federal agency,” Mayor Gray declared last week at the DC Vote 2013 Champions of Democracy Awards 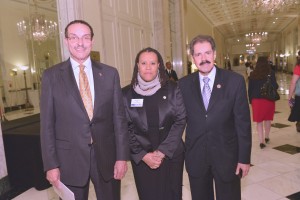 Gala.  “And we’re not asking anybody for federal money. We’re simply asking for the authority to spend our own dollars.”

Rallying the theme of ‘No Taxation Without Representation‘ before honoring a group of veterans from the District of Columbia, Gray’s remarks emphasized how the federal shutdown might serve to magnify the ramifications of District disenfranchisement.

Gray, The Honorable Eleanor Holmes Norton (D-DC), NPR’s Diane Rehm and DC Council Chairman Phil Mendelson were among the notable attendees at DC Vote’s annual event at the Mayflower Hotel, co- chaired by Trish Vradenburg and Vinoda Basnayake, which recognized 2013 Champions of Democracy honorees Mary Ann Stein (Moriah Fund), Veterans of the District of Columbia, and Representative Jose E. Serrano (D-NY) for their dedication to fulfilling the promise of democracy.

Founded in 1998, DC Vote is dedicated to securing full voting representation in Congress for the residents of the District of Columbia.