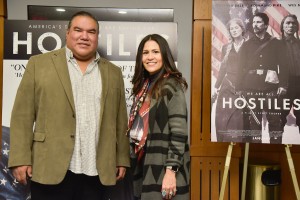 The National Congress of American Indians (NCAI) celebrated Entertainment Studios’ film Hostiles for its culturally accurate portrayal of Native peoples with a special DC screening.  NCAI partnered with The Native Networkers (TNN) and the National Indian Gaming Association (NIGA) to host the screening of the feature film starring Christian Bale and Wes Studi.

Hostiles takes place in 1892 and tells the story of an Army Captain (Christian Bale) who reluctantly agrees to escort a dying Cheyenne chief (Wes Studi) and his family back to tribal lands. On the journey, they meet a widow (Rosamund Pike) whose family was murdered on 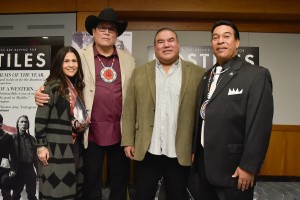 thecplains and offer their help. As the former rivals make their way from an isolated Army outpost in New Mexico to the grasslands of Montana, their relationship moves from antagonism to compassion, demonstrating humans’ capacity for change. The ensemble cast also includes Ben Foster, Timothée Chalamet, Jesse Plemons, Q’orianka Kilcher, Rory Cochrane and Adam Beach.

To achieve accuracy and depth in the Native-focused content of the movie, director Scott Cooper worked with acclaimed Native filmmaker Chris Eyre (Smoke Signals, Skins), and Native academic Dr. Joely Proudfit as consultants. Says Cooper, “They were on set 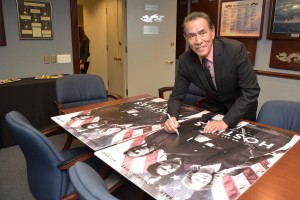 every day to help the actors with language, with gestures, with rituals. Their work was of the utmost importance, and it was deeply gratifying for all of us.”

Among their efforts was finding a Native team that not only spoke fluently the rarely heard Northern Cheyenne dialect spoken in the film, but that could teach the language and have knowledge of how Native speakers would have sounded at the end of the 19th century. Says Cooper, “To hear the language spoken in the right dialect and in a respectful way by Christian and Wes is something great to see on screen. It’s just a victory that millions of people will get to hear this 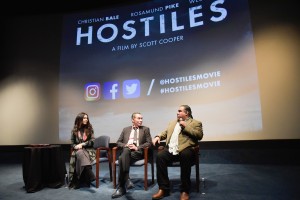 “It’s bloody difficult,” Bale said, “but it’s wonderful. Speaking the language correctly is also allowing me to understand a bit of the Cheyenne belief system. I’ve been so surprised because it seems impossible but there’s such a natural flow to it.”

Previous Post: Meet DC’s Newest Champagne Lounge
Next Post: 11 Things That Go Through Your Mind During Your First Float Therapy