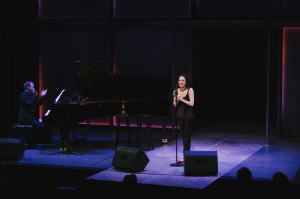 The scene at Arena Stage’s Mead Center for American Theater was intimate and unforgettable Monday night as Tony and Emmy award winning Bebe Neuwirth took to the stage for a sold out one-night-only special performance as part of a benefit and presentation of the second annual Beth Newburger Schwartz Award, which was presented to Arena Stage Emeritus Trustee Arlene R. Kogod.

From her Broadway debut in A Chorus Line to Chicago, Cheers, 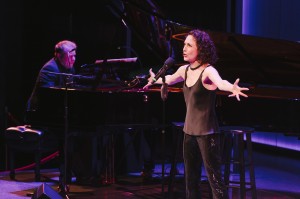 Frasier, and now Madame Secretary, Neuwirth’s career has been distinguished in theatre, television and film.  In this special performance, “Stories With Piano,” she and accompanist Scott Cady performed a collection of musical tales.

In between cabaret-style sets Neuwirth spoke about the importance of art, and how the theater relates to our most basic nature:

“The importance of the arts is beyond words…  It seems to me that our show is actually fitting here, as we celebrate the Arena Stage, because my feeling and theory is that the stage and the theatre is our tribal fire. It’s where we come to tell stories, and it’s where we come to 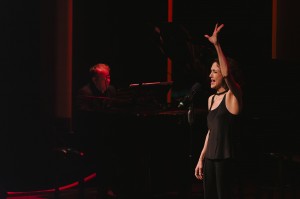 listen to stories.  Art is how we know ourselves.”

“And I think that ever since humans gathered in tribes, they gathered around the fire, and that’s how we know ourselves.  And I feel like there is something primal about the lights of the theatre.  It is our tribal fire and we are all a tribe together, healing ourselves, learning about ourselves through art.”

After the performance, Neuwirth joined fans and supporters for sips and sweets on the theatre terrace.

Previous Post: Celebrating Mezcal, Tequila’s Cousin, at the Mexican Cultural Institute
Next Post: Designed to Shine: Inside the Room to Rebloom Benefit