Highlight of The Hill and Entertainment Tonight’s #WHCD pre-party at the Canadian Embassy…?!  Posing for pics with the “Most Interesting Man in the World.”  For real.

For starters, celeb chef Spike Mendelsohn was on hand, inspiring the passed plates and cocktails.  (He’s Greek, but Canadian approved!)  There were small plates and passed plates and wine on demand.  But when you asked for a mixed drink… it poured in in a pint glass.  Canadian cool points scored!

there as well — bypassing the crowded first floor indoor/outdoor patio for the even more crowded (but arguably more picturesque) rooftop veranda.  And then there was actor Jonathan Goldsmith, aka Dos Equis’ “Most Interesting Man in the World.”  I’m not ashamed to admit that I jogged after him with a photographer in tow!

But who was actually the most interesting man at the party??  Likely the Canadian Mountie “Ferg” — a constable of the Royal Canadian Mounted Police — who was flown in from Ottowa and didn’t even have 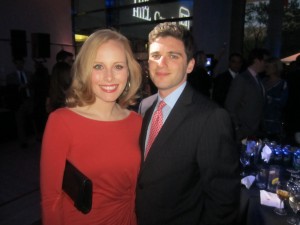 to beg to have his picture taken with each. and. every. celeb at the soiree.

“We have the substance that’s part of The Hill and the sizzle of Hollywood,” Doer said in a pre-party interview to dish on the event with ET! “It’s a perfect way to celebrate democracy and have fun doing it.”