It’s possible that going in for your very first float session may actually cause more anxiety than it is meant to reduce. I’m going to try it, and I have to admit, I’m feeling all the feels.  On the way to the brand new Soulex I’m racked with worry.  I forgot my swimsuit.  But wait, they never actually told me to bring a swimsuit, so maybe that’s ok.  I have no idea if I’m claustrophobic.  Well, I guess I’m going to find out. What happens if I fall asleep?? And so on.

If you haven’t heard of it before now, you may have been living in a sensory deprivation chamber of your own.  Float tank 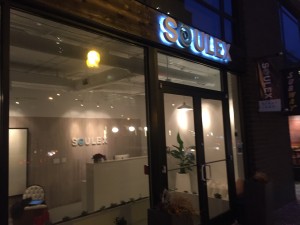 therapy is becoming increasingly popular, with float spas opening up not only in major cities, but in an increasing number of suburbs as well.  The DC area has a handful of float venues, from Annapolis to Ashburn, but Soulex is the first to open within the city limits.

Studied by neurophysiologist and psychoanalyst .John C. Lilly, float therapy is a restoration technique that relies on isolation and sensory deprivation.  As the brain perceives external stimuli even while asleep, Lilly sought a way to bar that stimulation. Float therapy’s weightlessness, blackout and soundproof tanks are meant to alleviate all stress.  If done correctly, an hour of float can equal 4-6 hours of truly restful sleep.

Sounds like a miracle cure for today’s overstimulated society.  But what actually happens when you try float therapy for the first time?  I was going to find out.  Soulex Float Spa (1010 Massachusetts Avenue) invited me to a complimentary spa experience.*  They provided the opportunity, but left the findings to be purely personal.

It’s a relief to find that the lobby, relaxation and treatment rooms are reminiscent of a traditional spa; they have soothing tea, relaxing sounds, and calming works of art.  A technician will take you to your treatment room and explain in as much depth as you require how the machine works and safeguards in case you are nervous about closing yourself in it.  You’ll be offered earplugs (preference, not necessary), a shower cap (trust me, don’t bother), and a spray bottle and wash cloth to take with you in the pod (that you’ll likely never find once the lights go out). After stripping down (no bathing suit) and taking the obligatory in-room shower, the machine will start to fill with warm, salinated water. And that’s where the traditional spa experience ends and the flat spa experience begins. 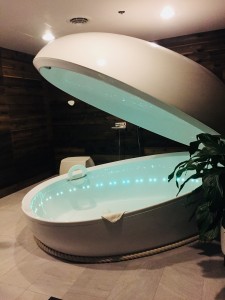 The lights won’t go dark immediately upon closing the hatch. The first six minutes or so are a pleasant undulation of rotating colored lights with a soundtrack of relaxing outdoor atmosphere noises: birds chirping, waves and the like.

When you’re lulled into a sense of calm, that’s when the lights dim, then turn off completely, and you’re left for another 50 minutes or so in utterly quiet blackness.  Some people find this exceptionally soothing.  Some don’t.  And now I know why.  What happens when left to yourself, and only to yourself, for an hour?  After some training, you might learn to shut out the world and relax as Lilly’s work suggested you to do.  But if you’re me, your mind wanders.

Oh crap. We forgot to pay for parking.  That was the very first (non-relaxing) thing that came to my mind, followed by a not small series of things I needed to remember or think about that I hadn’t had a chance to slow down and actually contemplate all day.  But since I was stuck in the tank and unable to do anything about them, I forced myself to think other thoughts.

Am I relaxed? I was probably only about 5 minutes in, but it felt like forever, and I was already wondering if I was doing it right.  I focused on my muscles from toes to the crown of my head to attempt to relax each in turn, but found they really were already relaxed. It was just my mind that wasn’t.

Focus on your breath. Yoga training was coming in there.  I started counting the length of my inhale and exhales to keep the monkeys in my brain from controlling my thoughts. But after some time….

How long has it been? I honestly couldn’t tell if it had been mere moments or if my session was almost up.  It’s amazing how time is so relative to other stimuli. And since I had started thinking about time and space…

Where am I in this pod?  I started to touch the machine, using its walls, floor and ceiling to create some spatial awareness and momentarily forgetting to just relax as I instead started to push myself around a bit and enjoy the experience of floating not in stillness, but in movement.  And after (maybe) a few minutes of that, my nose started itching.

Can I scratch my nose in this blackness without getting salt water in my eye? I lifted my hand and shook it fairly vigorously, then held it up to allow any spare droplets to fall away from me.  I found my nose easily in the blackness, but (drat!) still got super salty drops of water on my face. I felt around for that washcloth I had brought in with me, but by the time I finally recovered it, I realized it was soaked with saline anyway as I hadn’t left it far enough from the water.  Ouch.

So I just closed my eyes tightly and resolved to spend the last minutes – however long they were – just being totally still.  And just as I decided this, the lights started to pulse again and a soft automated voice alerted me that my session was coming to a close. Amazingly, although some of it had seemed interminably long, now I was thinking well that was over 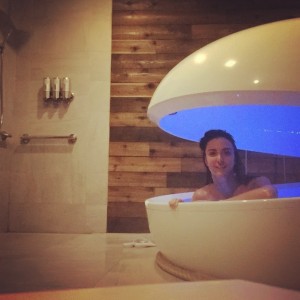 As I opened the machine to re-emerge into the world, adjust my eyes, and find out if my hour had been spent honestly achieving any state of relaxation or mini-zen, it struck me that I’m likely a great candidate for Soulex float spa’s multiple float packages. (Translation: I’d need several of these experiences to actually slow down or turn off.) Why?  Because my very first thought was how could I share this on Instagram?