Genevive Twomey (in white, far left in image above) won’t give in to gossip like some famed Edwardian era woman.  No, the Cathedral Choral Society‘s new Executive Director insisted on secrecy surrounding the society’s upcoming season… refusing to divulge even if it might continue with performances of a decidedly English persuasion.

“I do love [the Edwardian era], so it’s perfect for me.  But we are coming up on our 75th anniversary, so I was thinking we could go through the nineteen teens, the 1920’s, and work toward our 75th anniversary…” she hinted — speaking only of the parties and not of the Society’s artistic program.

But there would be Edwardian music on this night!  Holding its annual gala — the Cathedral Choral Society’s most significant annual fundraising event — an Edwardian Gala at the Fairfax Embassy Row Saturday night, Twomey and CCS Music Director Reilly Lewis 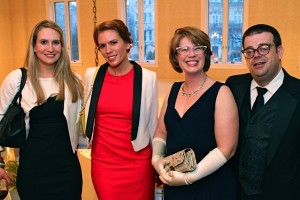 held court over a unique period event fashioned just as in your early Downton Abbey fantasies.

And don’t think that show hasn’t had its affect on the arts!  Twomey holds it — and other popular culture like it — in high esteem for bringing Millennials back to music.

“People that have an interest in the arts usually had it in their homes growing up; usually someone played the piano or another instrument,” explained Twomey.  “What we find now, in this generation, is that they explore the world around them more.  They may not have had a grandmother that knit, but they’ll teach themselves to knit… online.  I believe people come to music and art because they are discovering and wanting to explore their world beyond television and the internet.”

Check out the Society’s last concert of the season, a Classical Showcase — and see if you can get the goods on what’s coming up for the symphonic chorus in 2014/15 — May 18th, in the Cathedral!