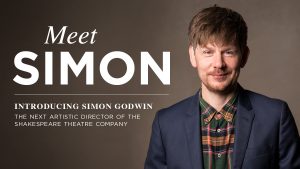 The Shakespeare Theatre Company announced today that after an international search, Simon Godwin has been appointed as its next Artistic Director. Godwin, who is currently serving as Associate Director at the Royal National Theatre, will succeed Michael Kahn, who has been at the helm of STC since 1986.

“I’m delighted that Simon has accepted the role of Artistic Director,” said Chris Jennings, STC Executive Director. “He’ll bring a fresh energy and vibrancy to STC. Simon has an incredible affinity for making classical work that speaks to today’s audiences. I think we are lucky to have a person of such talents coming to work in D.C.”