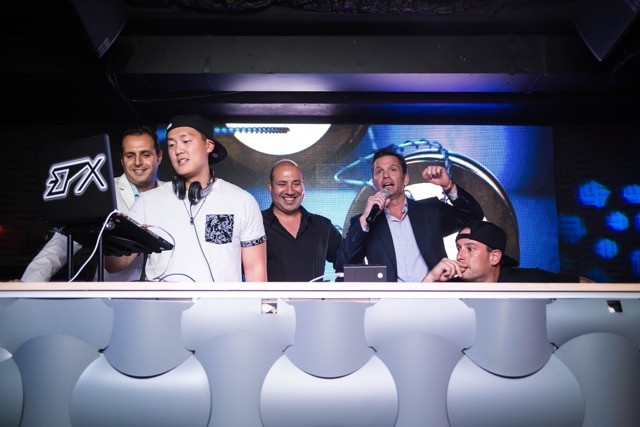 The space’s design is old school, but its electronics are not, boasting a state-of-the-art $250,000 German-imported d&b audiotechnik Y-series sound system. Cork hardwood floors and ultra-thick surrounding soundproof foam help guests feel they are listening in at a recording session; acoustics are designed specifically to reflect a recording studio in a nightclub setting.  But the smaller space also comes with a capacity of about 300, so there’s the potential for some musical mayhem.

Add in the over 85 illuminating lighting fixtures and a nightly laser light show — plus those two jumbo hanging dance floor disco balls — and Soundcheck spins onto center stage for Washingtonians looking for an almost-concert night out.

While DJ EPX spun to the invite-only opening party, guests enjoyed hor d’oeuvres like watermelon cubes with feta mousse and chatted about the upcoming Soundcheck calendar that includes heavy-hitting DJs like Pete Tong and Cedric Gervais. For the troopers in the crowd, the more immediate focus was London-based DJ, Kryder, who hit the stage around midnight after the club opened its doors to the general public. Lots of fist pumping ensued.