“Jazz brings everyone together,” said founder Charles Fishman as he introduced, Elijah Jamel Balbed, a DC Jazz Festival Fishman Young Artist Tuesday night.  Surrounded by the decadence of the Turkish Embassy, Elijah and his talented band took the stage with their own turkish delight as an installment of The Fishman Young Artist Series shined a spotlight on the city’s exceptionally gifted young talents. 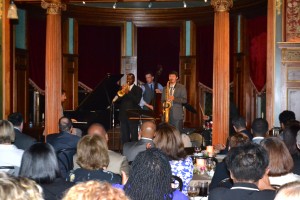 A saxophonist and composer, Balbed hails from Washington, DC, having studied with the area’s top educators Paul Carr, Charlie Young, and Fred Foss at Howard University.  On this night, he would play classics by Cole Porter and dedicate songs to jazz legends of the past.  But Fishman proclaims he has a promising future, with perhaps some legendary talent of his own.  Named Best New Jazz Musician of 2010 by the Washington City Paper, Elijah’s confident performance lived up to the title.

Previous Post: A “Drive-In” That You Don’t HAVE to Drive In – EXTENDED
Next Post: Girl’s Inc’s Power of the Purse