Late last month, a crowd of people went underground — to the Dupont Underground — in Dupont Circle to see some musicians play in an intimate setting.  Originated by Sofar Sounds (Sofar standing for “Songs From a Room”), the event was part of a global music series that started in London in 2009 and is so very exclusive… If you get the chance to attend one of these events, you’re seriously in the know!

At DC’s recent event, performers who came to play included DC native Daryn Alexus, who was the opening act for the night. The headline act came from members of the Tedeschi Trucks Band (bassist Tim Lefebvre, saxophonist Kebbi Williams, and drummers/percussionists Tyler Greenwell and J.J. Johnson) – performing alongside 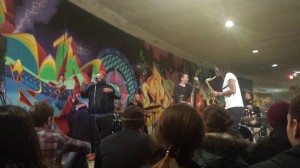 Sofar Sounds events provide an intimate atmosphere so that musicians can connect with the audience on a deeper level.  Truly deep since this one was underground!  The setting that night led to a quiet and attentive audience.

It was also an opportunity to listen to music in a way that feels intellectual. Alexus sang about being homesick for Washington, DC (she currently lives in Chicago) and being in financial debt due to a pursuit of getting higher education. The headline act was a chance to appreciate 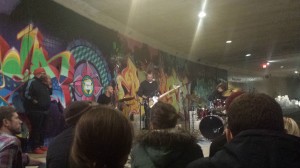 jazz music that has an avant-garde or even futuristic bent that blended well with Kokayi’s shifting between spoken and melodic vocalizations.

Previous Post: Restaurant Brain Trust Tackles The “Restaurant Bubble”
Next Post: Georgetown’s New ‘The Alex’: A Step Back in Time