“They say you always remember your first time,” laughed Arvind Manocha, the new president and CEO of the Wolf Trap Foundation for the Performing Arts from the podium on the Filene Center Stage during last Saturday’s annual Wolf Trap Ball.

“I was told when we first moved here in January, ‘Wait until you see the Wolf Trap Ball…’ And I have to say, even after all the hype all through the year nothing could prepare me for walking in here tonight and seeing the grandeur of this stage.”

Even the man who was formerly COO of the Los Angeles Philharmonic and the Hollywood Bowl called it “overwhelming” and unforgettable.  Some 800+ guests were in attendance, including Congressman 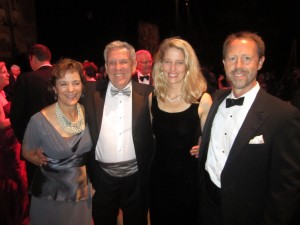 James Moran and Her Excellency Anne Anderson (Ambassador of Ireland).

Co-Chairs The Honorable Sean O’Keefe, Ms. Karen Schaufeld and Ms. Kimberly Stewart played host — along with French ambassador François Delattre and his wife, Sophie, to an evening perhaps more fit for galoshes than ballgowns, but nevertheless bringing in a downpour of well-wishes for Manocha, the National Park, and for the proliferation of performing arts in general with this year’s French theme: Joie de Vivre.

“You brought the stage, and we brought the weather,” joked Ambassador Delattre, excited to share his country’s artistic acumen and partner with Wolf Trap on the Ball for the first time since 1992.

The actual deluge — of drinks, dinner, dancing, and of course, donations — raised a record $1 million for Wolf Trap’s arts and education programs.

Not a bad memory for our “first time” at all, Mr. Manocha!