Madigan and his bow tie are Maine-bound.

Even the skies cried Saturday afternoon at Carmine’s for DC’s Man About Town, Bob Madigan,

who announced his retirement after 50 years in the media business — 20 of them at WTOP, 13 as WTOP’s “Man About Town” fixture — mostly covering the best of Washington news and lifestyle.

Madigan, whose unique beat was eliminated late last year, had continued with the news station as a veteran reporter, yet with the dawning of the new year, admitted he longed to try out his three R’s, as described to Janet Donovan (Hollywood on the Potomac):  “Rest, Read and Recreate.”

He’s headed to Maine to do just that. 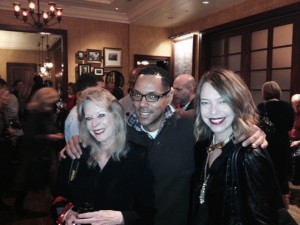 Fans and friends in the industry, hosted by Jill Collins, Aba Kwawu, Tommy McFly, Wendy Gordon and Deb Fiscella, crowded the back room at Carmine’s to wish him well.  Sporting sequin versions of Madigan’s signature bowtie and chowing down on meatballs, ziti and bowtie pasta, attendees also serenaded the seasoned soiree-goer with a rendition of “Bob’s Man About Town to Me” (sung to Billy Joel’s “She Always a Woman to Me“) that made light of his former career’s peaks and perks.

Congratulations, Bob!  All the best in Vacationland!