Washington’s elite — including those White House Correspondents the city has been celebrating — mixed with some of Tinsel Town’s biggest stars at Capitol Hilton prior to the official annual dinner Saturday night. 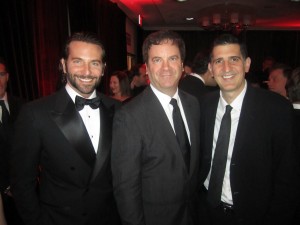 Squeals of “I just met Katy Perry in the bathroom!” mixed with “I just finished Season 5 of [insert show] and I feel like I know him,” in addition to plenty of, “Can I get a picture with you?’s.”

An almost indistinguishable row of pre-parties dotted the conference rooms adjacent to the grand ballroom, with a parade of partiers lining the walls and waiting in the hallways for a glimpse of Michael Douglas, Claire Danes or even Anna Wintour as they

At the Newsweek/Daily Beast cocktail party (hosted by EIC Tina Brown, Baby Shetty, Barry Diller, Jane Harman, and Harvey Weinstein), the entrance of Nicole Kidman and Bradley Cooper stole the show — but didn’t stop everyone from snapping photobooth pics with cardboard cutouts of the President and Conan O’Brien.  And in the Washington Post room, breathing stopped

momentarily when Gerard Butler walked in.  Bon Jovi rolled his eyes at most picture requests — but John Legend graciously accepted them all.  Geraldo did, too.  (But only if we would be in the picture.)

There were celebs of all sorts and temperaments, but our pick for most

interesting table guest of the night goes to… Louisville basketball player Kevin Ware, who attended with his girlfriend and two massive metal crutches.  “This is unbelievable,” said Ware of his attendance at NerdProm (And we almost didn’t believe it when we saw him there, too.  Extra kudos for maneuvering the tuxedoed throngs with that injury!)

Despite warning that this year’s event would its lessen its emphasis on celebrity attendance, the pre-party sightings, including almost the entire casts of Homeland and Netflix’s House of Cards didn’t disappoint. During the dinner, neither did the President’s humor.