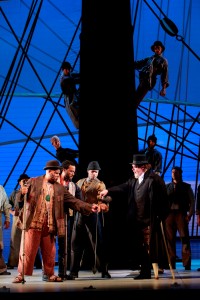 Audiences can expect to be swept out to sea alongside Captain Ahab, relentlessly scouring the ocean for the fabled white whale that severed is leg… made all the more real with massive nautical sets and stunning multimedia visual effects, all while anticipating the epic showdown between man and beast,