“I’m not a cynic,” insisted House of Cards creator Beau Willimon, the featured guest at a Smithsonian Associates event last Thursday at the Museum of Natural History.  And he’s not a spoiler, either.  Despite David Carr — New York Times writer and moderator of the evening’s Q & A — trying desperately to get him to “show a little leg,” the most Willimon would do was roll up the cuff of his jeans and show some hairy ankles.

“You’ll have to watch and find out… Do you guys really want me to ruin anything for you?”  Well, no.  But also yes, or the packed auditorium wouldn’t have shelled out $30 a seat to hear his inside scoop on the bingeworthy Netflix series.

The agony of indecision.

“I will say this,” divulged Willimon, “the first two seasons, we knew we had two seasons.  It was always the plan for Francis to become President at the very end of Season 2.  But we didn’t know how he would get there… The big changes I made in the story along the way — Russo running for 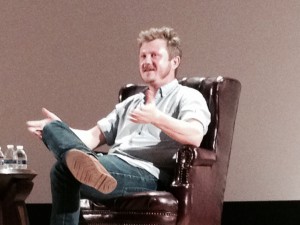 Governor — wasn’t originally part of the story.  Rachel Posner becoming a main character, and this complex relationship between her and Doug, was never part of the bargain.  But we stuck mostly to the plan: Kate Mara was out Season 1, Episode 1.  Peter Russo would die, and Frank would be President at the end.  But we ignored the inevitable: The ‘Then What?!'”

But that ‘Then What’ is looming large as the series is currently filming its third season in Baltimore, and while the ambitious Congressman from South Carolina’s 7th District (that pursues his own agenda often at the expense of people — according to Carr, “Frank is not a good egg.  He’s a bad egg.  He’s a bad man.”) has finally made it to the White House, there must be more to the story.

“Early on in House of Cards… we would have conversations about how much of a plan does Francis have and how does it go wrong,” explained Willimon.  “But what we kept coming back to is that real politics isn’t about seeing 15 steps ahead, and carrying out those 15 steps accurately.  It’s about having a plan that very quickly can go awry.  That chaos/disorder/the unexpected introduces itself — and then, how do you react to that?  How do you turn lemons into lemonade?  How do you turn the chaos around and re-instill order and make it work for you?  Or… sometimes, your only plan is to introduce chaos in the hope that opportunities will present themselves.”

So there will be chaos.  There will be power struggles.  There may be some current events masquerading as fictional plot lines.  There may be more follow-up of what Willimon calls the “Threechem… or the Meacharound.”  And one audience member even called for Claire to attempt a run for the Presidency herself.

Who knows?!  Well… Willimon does.  But despite what the world may think about his dark drama, he insists, “I am not a cynic.”

“I actually think most people show up to work in Washington with the best intentions to serve the country and for the benefit of their fellow citizens.  They come with pretty strong ideals, and the more powerful they get, the more difficult choices they face.  Their ethics are constantly tested.  Sometimes their ethics are eroded.  A lot of people maintain their idealistic core, and a lot of people have to let a lot of it go because of the responsibilities they bear on their shoulders.  And what you see [in House of Cards] is the extreme other end of the spectrum.”