There was a distinctly county fair feeling — without the parking hassle — about last weekend’s Alexandria Food and Wine Festival.  But 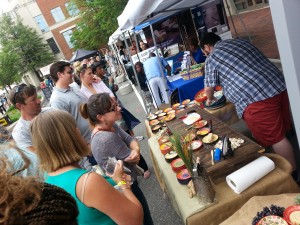 attendees didn’t expect funnel cakes.  Instead, they gobbled up gourmet food and pours of locally produced wine.
The event gave much more than just a taste of the best, introducing residents and visitors alike to some previously untried neighborhood gems as well as featuring some popular favorites —  showing a full range of 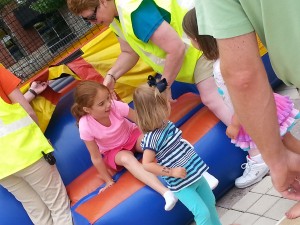 the awesomeness of Alexandria for a fraction of the price.
The event kicked off with notable local reporters judging the food stalls, later awarding Sweet Fire Donna‘s (BBQ and beer) with the day’s ultimate eats accolade.  Whole Foods’ chicken and waffle offering was also a fan favorite.
All in all, it was a day to play.  Families as well as groups of hip singles jammed to live music, in great weather… and in a wholesome environment.