Tickets are already on sale — the earliest on-sale date ever! — for the season’s most coveted Sample Sale, the District Sample Sale, which brings together all of DC’s savvy stylistas on Tuesday, September 24 at the Sphinx Club.

This is the Washington region’s biggest and best high-end bargain shopping event, featuring over 20 top 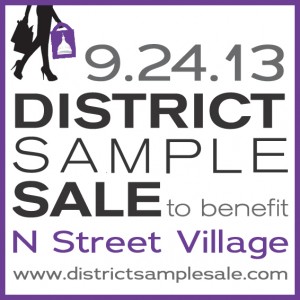 designer clothing and shoe boutiques selling their end-of-season wares at liquidation-level prices… or previewing the upcoming season for less than the usual pretty penny.

Attendees to this year’s sale — the lucky 13th DSS! — will enjoy cocktails, hors d’oeuvres from several participating restaurants, a fashion-focused silent auction, and a raffle, all to benefit N Street Village, an organization which empowers homeless and low-income women to claim their highest quality of life.

The first hour is open to only those with VIP admission — regulars swear by this head-start for the best deals and hardest to find sizes.  Grab those tickets now!