It’s not ill-timed that Rodgers and Hammerstein’s classic musical Carousel (1945), tells an ageless story of perseverance and the indomitable human spirit. No matter how you feel about the outcome of the recent election, the road to November 7 was draining.

A post-election filter highlights how anachronistic is Carousel – weavers and boardinghouses are long gone – but as the past months demonstrated, class struggles remain evergreen. Whether the corny nostalgia of this morality play offers you charming relief or jarring discord will depend on your state of mind. 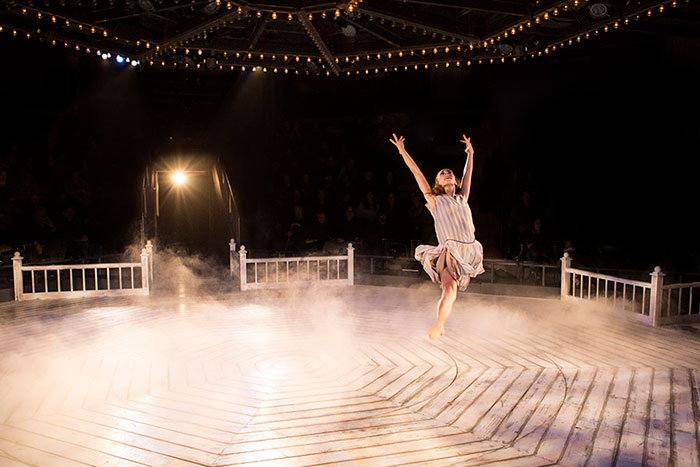 Arena’s artistic director Molly Smith directs Arena’s revival of Carousel with verve, spryly dragging the audience into its frothy clambake.  Smith wisely lets the musical speak for itself, without contemporary commentary. She has exhumed an American treasure and presented it with polish. It’s for the audience to digest, appreciate, and criticize with all of its beauty and blemishes. Standards including “If I Loved You,” and “June is Bustin’ Out All Over,” are gracefully delivered. If lyrics like “This was a real nice clambake, and we all had a real good time,” aren’t the cleverest on the boards, they nonetheless get your toe tapping.

The flaws with Carousel rest squarely with the book. The plot’s cornerstone is a frequently rehashed bad boy/good girl/true love/moral conflict trope as barker Billy Bigelow (Nicholas Rodriguez) and mill worker Julie Jordan (Betsy Morgan) struggle against the limits of their station and characters to find happiness in an impetuous marriage. The women are defined by their selection of husbands – the only choice they can freely make – and the plot juxtaposes a good and a bad marriage. Julie’s best friend, Carrie Pipperidge (Kate Rockwell), and fisherman Enoch (Kurt Boehm) have charming chemistry as Billy and Julie’s happier counterparts. The other characters are caricatured, from the jolly matriarch Nettie (Ann Arvia), and the virtuous patriarch David Bascombe (Thomas Adrian Simpson), to the lecherous Irish con man (Kyle Schliefer).

If not a balm for the intellect, this production is a feast for the eyes. Ilona Somogyi’s sea-washed period costumes perfectly evoke the fisherman wharf culture of Maine in 1873. Parker Esse’s superlative choreography fills every inch of the circular Fichlander stage with exuberant leaps and whirligigs, or taut athletic ballet. Set Designer Todd Rosenthal’s minimalist whitewashed wood set cleverly enlists the robust cast as props, enhancing the story with inventive pantomime. A heavenly strings and horn section nested on an elevated platform creatively expands the space, while Musical Director Paul Sportelli and the rhythm section play from a more earthly orchestra pit, their physical division paralleling Billy’s own heaven-and-earth plot experience.

Your ears don’t suffer either. The singing compensates for the songs. The women dominate, with Morgan, Rockwell, and E. Faye Butler as Mrs. Mullin soaring vocally. Arena Stage veteran and Helen Hayes winner Nicholas Rodriguez manages the difficult job of portraying a hothead, gambler, thief, and wife beater as ultimately sympathetic. The ensemble makes the grand scale numbers thrill. All in all, if you check out this real nice clambake, you’ll have a real good time.

Carousel is playing at Arena Stage at the Mead Center for American Theater from through Dec 24, 2016 (1101 Sixth St. SW, Washington DC 20024). Running time: 2 hours and a half hours with one 15 minute intermission.