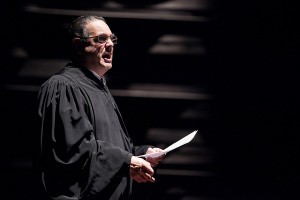 As we wrote the first time it played in Washington, playwright John Strand’s “The Originalist,” is theater unequivocally of Washington, by Washington, for Washington… to borrow President Lincoln’s famous expression.  But to be sure, it will be fascinating to watch this one under a dramatically different political climate this time around.

Returning to Arena Stage July 7-30th — though restaged this time at the larger Kreeger Theatre — this play, set in and around the nation’s capital in 2012 and 2013, centers around the divisive and controversial Supreme Court Justice Antonin Scalia (brilliantly played by four-time Helen Hayes Award winner Edward Gero) as he broods over and prepares his dissenting opinion in United States v. Windsor (the landmark case that struck down section three of the Defense of Marriage Act).

Gero reprises his role this time around, but he’s not brooding and drafting alone. His spunky new law clerk– self- 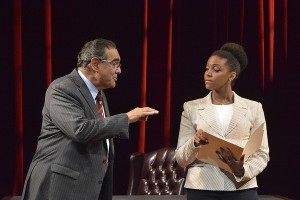 described “flaming liberal” and Harvard Law graduate Cat (performed this time by Jade Wheeler)– is determined to, if not move Justice Scalia on policy issues, understand and learn from this puzzling “monster” of a man who has made the US Constitution into a veritable monument.  While she wonders if he has a heart; and he wonders if her soul will be saved; the audience finds itself (unusually) rooting for both sides of the aisle on this one.

Smart, funny, moving, and profound, anyone who’s been in DC (or watched its political theatrics) for even the briefest time can find something to love in this production.

The Originalist received its world premiere at Arena Stage in 2015, where it was extended twice due to popular demand. It returns to Washington, DC following celebrated productions in Sarasota, Florida and Pasadena, California, and following the DC run will move to Chicago’s Court Theatre.  It was originally commissioned as part of Arena Stage’s Power Plays initiative, which focuses on stories of politics and power.

Tickets to this production and discussions are still available here.