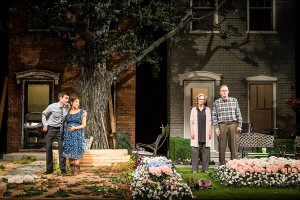 There are plenty of shows about life in Washington, DC, but they primarily revolve around the White House, Congress, the spy-type agencies, and all the intrigues therein. The occasional scene of Olivia Pope drinking red wine on a white couch wearing white cashmere does not represent the life of the average Washingtonian. Native Gardens, the new play by Karen Zacarias now showing at Arena Stage, does.

It’s refreshing to see a story about the domestic existence of people who live and raise kids in Washington. The play is quite literally “behind the scenes,” focusing on two backyards in a tony unnamed burg evocative of Georgetown. Scenic Designer Joseph Tilford’s set beautifully engages the audience before a word is spoken. Older, starchy, Republican residents, Virginia (Sally Wingert) and Frank (Steve Hendrickson) Butley own the 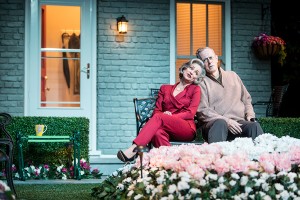 patch to the right (see what they did there??). This square gem is manicured perfection, Frank’s peony profusion a contender for local Best Garden . . . if only those meddling kids don’t mess it up. New kids on the block are Chilean lawyer Pablo (Dan Domingues) and very pregnant Mexican-American wife Tania (Jacqueline Correa), a doctoral student with a passion for native gardening. Their house falls squarely into the “fixer upper” category, the yard a scrabbly dirt patch with potential.

Yeah, Zacarias did that. Try not to think about how much more interesting the story might have been if the old rich folks had been Latino and the young kids Republican.  Predictably, Frank loves precise landscaping, pesticides, and non-native “pretty plants.” Tania hankers for an organic, native garden to boost bug proliferation. Gardening philosophies aren’t the only differences, and cultural jokes abound. Blake Robison directs with a situation-comedy tempo. The neighbors hug. The neighbors clash. They misunderstand. They roll their eyes. There are antics. Scott W. Edwards’soundtrack adds punchlines to the action on stage with humorous lyrics. 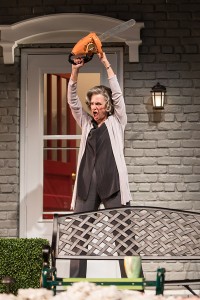 Let’s put aside the suspension of disbelief required to accept that one can by fiat shift a property line and build a new fence in an historic DC neighborhood without months and months of permit applications, ANC hearings, and petitions (writer falls on ground guffawing), and go with the heart of the plot: A border dispute. Pablo impetuously invites his entire firm to a barbecue in furtherance of his partnership dreams. This accelerates yard renovation, including replacement of an ugly chain link fence with a more attractive boundary. The Butleys rejoice! After all, fences make good neighbors. The fence, however, isn’t the problem. The location is. A surveyor’s assessment reveals that the Butleys have encroached on two feet of the Del Valles’ property. Yep. A white land grab from the brown skinned owners.

Here’s the thing – this isn’t a story we haven’t seen before. There’s nothing unfamiliar about the tropes. But that’s okay. In a world darkening with North Korean threats, hurricane induced mass suffering, and an international refugee crisis, it feels good to laugh. And, when it comes to challenging white privilege, it’s okay to be a little repetitive. Isn’t obliviousness the hallmark of white privilege? 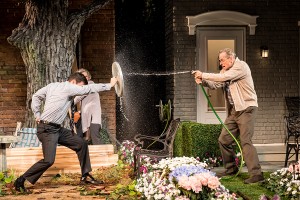 All the actors were strong. Domingues’ nuanced Pablo stole the show, but his character – a wealthy Chilean disowned into a partnership-ladder climbing immigrant in a white-shoe American firm (not to mention appeasing a hot-tempered, pregnant wife) – gave him much to work with. Wingert also stood out as Virginia, a complex soup of hardscrabble Polish-American, become gender-pioneering engineer, become genteel Georgetown doyenne. Correa and Hendrickson did the best they could, but Tania and Fred were more prototypical and less nuanced.

Without spoiling the plot, when the duress reaches its zenith, with chainsaws roaring toward catastrophe, humanity punches through. Though the ending may be a little immaculate, with all loose ends happily tied, the characters acknowledge that it could have turned out differently. While disappointing to have the finale delivered in epilogue form, rather than shown, it’s satisfying to tick off all the “awwwws.”

Zacarias observed after the show that “comedy comes from a place of great seriousness.” Neighbors battling neighbors isn’t really funny, and isn’t really fictional. Zacarias manages to take a conflict microcosmically representative of a divided nation, and rather than dumping the audience into depression over the insurmountability of our differences, delivers hope. The DC-based play can be adapted to any backyard, anywhere in America. In an era of increasing divisiveness, it’s nice to see neighbors resolving conflict, with some great one-liners to boot. I’ll take my happy ending, with whipped cream and a cherry on top.