No, last Thursday night wasn’t Bring Your Pet to Work Day on Capitol Hill, but the pets were on parade as the Animal Health Institute (AHI) announced the winners of its Cutest Pets on Capitol Hill contest, part of its annual Celebrity Pet Night event.

Elected officials and Congressional staff were on hand for this “p”awesome event, joined by celebrity pets from two of this year’s most highly 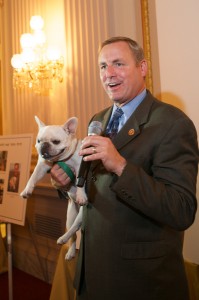 anticipated films: the adorable dog Marti (who “Sandy” in the urban remake of “Annie”) and Orion the cat (who plays “Buttercup” in the last two movies of the “Hunger Games” series).

The night began with the unveiling of the Cutest Pet winners in the Dog, Cat and Exotic pets categories.  Every year, members of Congress and staffers submit their cutest photos of their pets and winners are picked by Washington DC-area journo judges. This year they were NBC Washington’s Angie Goff, The Hill’s Judy Kurtz, POLITICO’s Helena Bottemiller Evich, Fishbowl’s Nick Massella and WJLA/WTOP’s Dr. Katy Nelson.

The judges narrowed down the competitive field of hundreds of furry, feathered and scaly entries to the top five cutest pets in each category. Then, the voting public stepped in to determine the overall winners through online voting via Facebook. The evening’s big winners came from Senator Boxer’s office (Dog), Representative Mike Honda’s office (Cat) and a rabbit (Exotic) from Senator Warren’s office. Go here to see all the nominations.

“The Cutest Pet’s Contest is held in conjunction with AHI’s Pet Night, a longstanding favorite event on the Hill where we celebrate the bond between people and their pets,” said AHI President, Alex Mathews.  “The availability of medicines to keep animals healthy plays an important role in promoting the human/animal bond.  Increased awareness about the relationship between human and animal health helps to prevent disease transmission and helps protect public health.”