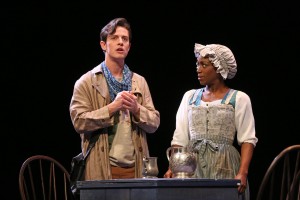 The Monty-Pythonesque opening of playwright Timberlake Wertenbaker’s Revolutionary War drama does not prepare you for the weight of Jefferson’s Garden. The ensemble play brilliantly stages a sweeping study of how America won its battle for universal freedom . . . ultimately without granting universal freedom. Jefferson’s Garden is a drama about relationships, the most critical being the clash between idealism and pragmatism, climaxing in the taut determination to reduce southern slaves to a numerical quota even as the architects wave flags to liberty. It should not be overlooked that the play is on the very spot where John Wilkes Booth assassinated President Lincoln for abolishing slavery. Interestingly, the keen de-romantification of American idealism was penned by a Brit. The Ford’s Theater production is the play’s 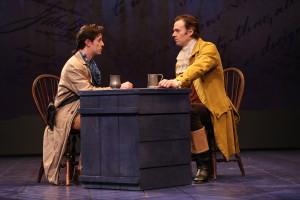 In contrast to the meatiness of the script, the staging is minimal. Milagros Ponce de Leon offers a spare set that transforms with simple props and Laura Mroczkowski’s lighting from a ship, to a tavern, to a grisly war, to an idyllic garden. On this canvas, Ivania Stack’s exaggerated and glorious period costumes dazzle. But the heart of the play is the ensemble (a stalwart cast of D.C. mainstays). The players are props, historical figures, archetypes, rhetoric, mood, and tone. Dual roles by certain performers amplify the play’s thrusts. 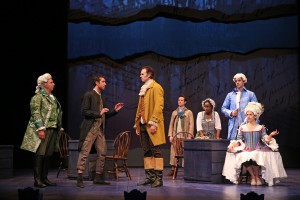 Michael Halling is the stand out as the very human, very flawed Jefferson. Impassioned yet encumbered, a visionary with glaring blind spots, he struggles to translate his idealism into codification, comprising his aspirations even as he becomes emotionally entangled in his slaves. Swirling around Jefferson are his foils. Christopher Dinolfo plays hot headed, earnest Christian, the Quaker pacifist called by the drum of revolution to follow his idol Jefferson. Felicia Curry is his love Susannah, a runaway slave. Christopher Bloch presents our idealists: the unflappable inflexible Quaker elder and the liberal politician George Mason. They bump against the results-driven pragmatists James Madison (Thomas Keegan) and Kimberly Gilbert playing not one, but two very different protective mothers. Jefferson’s slave and lover Sally Hemmings (Kathryn Tkel, who also plays Sally’s white contrapositive Betty) contrasts her freedom crusader brother James (Michael Kevin Darnall). All the cast shift and change roles, portraying multitudes. 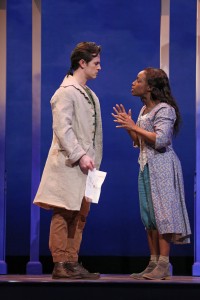 What’s in a word? When grappling with “liberty,” “slave,” and “freedom,” the weight changes depending upon the mouth that utters it. These words press each character to make difficult choices: family versus calling; love versus freedom; right versus reality. Wertenbaker notes of these compromises, “It seemed to me that this particular moment in American history is when the fault lines were laid, when the definition of freedom was corrupted.” As the cast continually reminds us, there is a tension between history and interpretation, the outcome of which depends on the whimsy of author and actor. Wertenbaker’s pen is like a scalpel, slicing away American revolutionary rhetoric of liberty, equality, and inalienable rights to expose the discomfiting reality that the Framers enshrined slavery in the Constitution with the Three-Fifths Compromise – a “compromise” made entirely without black input.

In the manner of knowing that your blockbuster franchise is setting up for a sequel even as the credits roll, so to do the reverberations of Jefferson’s mixed message conciliation continue to thrum at play’s end, priming us for the long-term

consequences that corrupt American politics today. The play isn’t perfect. Its gravitas is compromised by a pervasive tone of bemusement, and archness. Archetypal characters, including the states of Virginia and Maryland, are surprisingly one-note. There are notable omissions (anyone remember the Native Americans?). Nonetheless, as today’s government treads water in the ripple effect of the founders’ compromise, the history lesson of how the weeds were planted in the garden is one we all should observe and take to heart.

Previous Post: This Tech Is Helping DC To Get Fit!
Next Post: MonsterJam Triple Threat Series Mesmerizes At Capital One Arena