Want your night out to include a historic story in a historic venue?  Check out the world premier drama The Widow Lincoln put on by The Ford’s 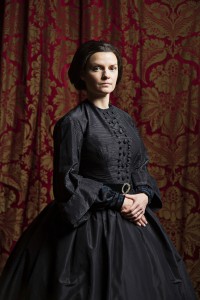 Theatre Society.  Written by James Still (The Heavens Are Hung In Black) and directed by Stephen Rayne, the production features Mary Bacon in the title role, playing January 23 through February 22, 2015 at the historic Ford’s Theatre (511 Tenth Street NW).

Commissioned as part of Ford’s 150: Remembering the Lincoln Assassination, a series of events marking the 150 years since Abraham Lincoln’s assassination at Ford’s Theatre, this play is all about one of the most controversial First Ladies of all time.

Set in the White House during the weeks following Lincoln’s assassination, The Widow Lincoln portrays a very human Mary in the aftermath of her husband’s death as she mourns the post-war life they will never share. It’s an emotional drama that explores the tenacious attitudes and heartbreaking grief of the maligned “Mrs. President.”

“I am struck by Mary Lincoln’s fierceness, by her wit and by the accumulation of personal tragedies that made it more and more difficult for her to live her life without fear,” said Still.  “Through my researching and writing, I’ve come to see a sharp political woman who is at once dramatic, tragic and, at times, triumphant.”

This fresh look at an otherwise familiar historical figure makes for a night out that might be surprisingly educational and entertaining.