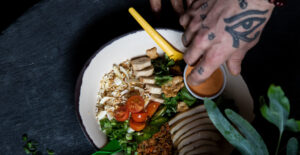 immigrant advocacy just blocks from the White House. But even if you didn’t know anything about its culinary inspiration you’d stop in for Wine Wednesdays… which just may be the best deal around!

Every Wednesday, Chef Enrique Limardo creates a special prix fixe menu for two at $29 per person. Each person will get to choose an appetizer (we like the Nueva Vida shrimp cocktail!), a main course (the old Saigon sandwich… yum!), and a dessert. And to top it all off, the three-course meal comes with a complimentary bottle of wine.

That’s a steal of a deal!