Twenty-five of the world’s best classical pianists were invited to perform at the John F. Kennedy Center for the Performing Arts on Saturday night. However, as masterful as they were, some of the performers could barley reach the foot pedals! 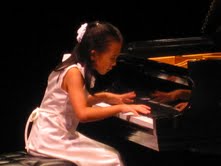 All between the ages of 6 and 29, these pianists were selected from over 2000 applicants to perform at the inaugural year of The World Pianist Invitational.  Applications and online video performances were reviewed by a judicial committee, before five performers in each of the five age categories were invited to Washington.

“We found out there wasn’t an opportunity for young promising pianists to play at the Kennedy Center and it seemed like such a crime,” explained Patrick E. Saty, CEO and co-founder of the competition, “I am absolutely amazed at how talented the pianists are – these young people are just regular kids with extraordinary talent developed through some exceptional dedication.”

After coming off stage Gianna Sabatini (a member of the six to nine age category) explained, “I love playing piano! I practice four hours on the weekends and one to two hours on the weekdays.”

Over $10 000 in cash scholarships were awarded by an international panel of music judges at the completion of the performances.