Several of the plays this season at Arena Stage have been about moving forward by looking back.  Making a better world by learning from the past.  Here’s another.

Currently on at Arena’s Kreeger Theatre stage, artist and activist Daniel Beaty portrays the famous — and infamous — Paul Robeson, as well as some 40 other characters… all by himself in “The Tallest Tree in the Forest!” 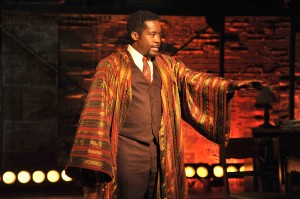 Robeson was a world renowned performer and champion for racial rights in the height of the Civil Rights Movement, and Beaty details his life, from childhood to “retirement,” following the evolution of his theatrical success and advocacy for inflammatory causes, that included even going so far as to be named a Communist during the McCarthy era!

The play, which features 14 songs and an on-stage band, revolves around this central figure.  But Beaty fascinatingly bounces between them all — all ages, all races, all ethnicities — with superb talent.  It’s worth the price of admission (and more) just to see his skill!

For close to three hours, audiences will be fascinated by multi-character transformation, monologues, narrative scenes, poetry and video footage of the era, which explores Robeson, his humanity, his courage and his contradictions, and why he was once called “The Tallest Tree in the Forest” — and once called upon to be “cut down.”

*The Tallest Tree in the Forest runs January 10-February 16, 2014 in the Kreeger Theater