She hasn’t yet decided Seahawks vs. Broncos, but  Teri Gault always cheers on the side of saving some money.  K Street Magazine caught up with the lifestyle expert and money saving guru (you know her from the Grocery Game!) in these final days before the Big Game to get her to spill some cost cutting tips — and help YOU to be perfectly party ready for the SuperBowl in a snap!

“Stay away from the prosciutto – this party is about being wild and funny, not sophisticated,” explains Gault, who is hosting her Super Bowl party as usual.   “Serve everything that’s gonna give you heartburn.  People love that!”

Almost all of her favorite game day recipes involve a slow cooker: (1)Chili, (2)Cheese Dip, and (3)Mini BBQ Sliders made from frozen meatballs and rolls. 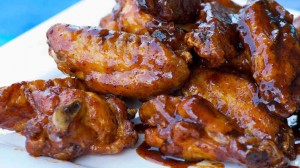 And then there are the chicken wings.  Last year, the National Chicken Council reported that Americans chowed down on some 1.23 billion hot wings for Super Bowl weekend, and predicted consumption is raising for Super Bowl XLVIII — held in conjunction with the 50th anniversary of the “Buffalo Wing.”

“Snacks, crackers, chips, frozen appetizers, popcorn — and yes, even wings — are all on sale during sporting season.  Add coupons and they are killer deals,” says Gault.

“Smart shopping is saving half without even using coupons, then using coupons as the frosting on the cake,” Gault insists.  “The whole idea is to not think of a single item on your party menu that isn’t on sale.”

With appetites satiated, Gault moves on to create her perfect party atmosphere with DIY 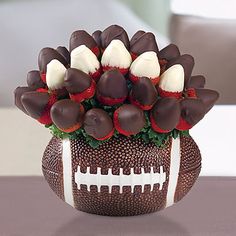 decorations… like making your own team streamers or attaching player pictures to an Edible Arrangements centerpiece (at right).

Festive doesn’t have to be fancy, according to the guru, who admits that she lines up the food in her kitchen as a buffet and uses solo cups as individual popcorn “bowls.”  “And I stock up on ice during the week before the party, because stores always sell out and it can get expensive.”

“It’s totally possible to throw a great Superbowl party for 15-20 people for under $100,” she claims triumphantly before adding “well, maybe not with booze.”

But Gault has a great and green-saving answer for that, too.   “BYO…Beer!”