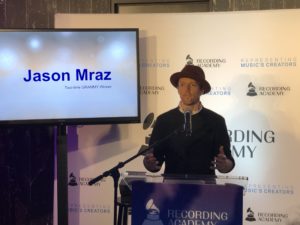 “What would Christmas be without Christmas music? Most of us would have probably ignored it by now,” joked singer/songwriter Jason Mraz Tuesday evening at the the Recording Academy’s annual holiday party at their downtown DC headquarters.

The two-time GRAMMY winner was in town to advocate for updating laws around how radio uses and compensates artists. In particular, Mraz has been working closely with the Recording Academy to advocate for the passage of the CASE Act, as well as the AM/FM Act, which would “make sure every creator is paid whenever someone profits from music.”

“No one should get a free ride on the back of these musicians,” he said to the intimate gathering — which included Senator Marsha Blackburn (R-TN), Senator Gary Peters (D-MI), Congressman John Curtis (R-UT), Congressman André Carson (D-IN), Congressman Gregory Meeks (D-NY), and Congressman Harley Rouda (D-CA)  —  explaining that just being on the radio doesn’t mean you’re earning much money.  “Really, only the songwriter or the copyright owner gets paid, not the artist, the drummer, the sax player… even though it might be their effort that is your favorite part of the song.”

After his bit of advocacy, Mraz took up a borrowed guitar and performed three short pieces, including a version of the holiday favorite Winter Wonderland, a new Mraz original he claimed was inspired by Mr. Rogers, and Lucky, suggested by a couple in attendance who shared that it was their wedding song.  Mraz insisted that they dance while he sang.