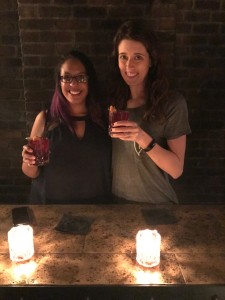 Imagine you’re strolling along the canals of Georgetown:  It’s early March of 2017, and there’s a chill in the air. The next moment, you’re entering through an unmarked door, only accessible through a secret code, and descending the stairs into a cozy, dimly-lit underground club, and you’ve suddenly been transported into the 1920’s! 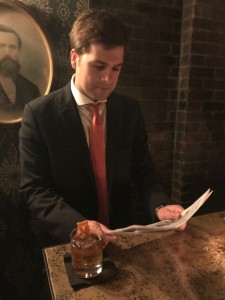 At an unveiling party of their new seasonal cocktail menu, the Prohibition-era bar took guests back in time as flapper-girls served up festive canapes and hors d’oeurves and bow-tied barmen supplied patrons with craft cocktails.

The menu is cleverly interspersed within a faux 1920’s newspaper; drinks and dinner can be found between articles about Alexander Graham Bell and intercepted booze trains. The Alex’s new cocktail menu is overseen by mixologist Danial Barnes, who’s incorporated both classic whiskey-bourbon cocktails, think “Old Fashioned,” with lighter, fruitier libations such as the “Pomegranate Kiss,” a delightful mixture of egg white, molasses and gin. The star of the show, however, was the “Bathtub Gin,” a concoction of gin, aromatic homemade tonic, and frozen star of anise ice cubs, served in a tiny ceramic bathtub.

Needless to say, the Alex is worth a trip back in time!

Previous Post: Sofar Sounds Concert at Dupont Underground
Next Post: The Select (The Sun Also Rises) – The Depth of the Iceberg