It was announced today that the Ford’s Theatre 2016-2017 season will begin with the new musical Come From Away directed by Christopher Ashley. Haven’t heard of that one?  Don’t worry.  There’s a lot of classic theatre and exciting features to check out in the iconic venue’s upcoming season.  Productions include Who’s Afraid of Virginia Woolf? directed by Aaron Posner and featuring Holly Twyford as Martha; the musical Ragtime, directed by Peter Flynn and featuring an all-local cast including Kevin McAllister, Tracy Lynn Olivera and Nova Y. Payton; and the 35th-annual production of Washington’s holiday favorite, A Christmas Carol.  Plus!: Political comedian Mark Russell will return for a one-night-only performance during the height of election season.

“We are thrilled to kick off our 2016-2017 season with the East Coast premiere of the inspirational musical Come From Away,” said Ford’s Theatre Director Paul R. Tetreault in a written statement.  “During a time when the nation will mark the 15th anniversary of September 11, Come From Away’s uplifting true story and vibrant music shows how the goodwill of others can shape our circumstances for the better.

“I’ve had the honor of knowing personally and working with Edward Albee for more than 20 years. He is certainly America’s greatest living playwright, and Who’s Afraid of Virginia Woolf? is truly a masterpiece. The duo of Aaron Posner and Holly Twyford has previously brought forth dynamic and remarkable work in D.C., (A Midsummer Night’s Dream, Sex with Strangers, Arcadia) and I cannot wait to see how they will bring Albee’s drama to life.

“Our spring production of Ragtime, a story of a nation facing great changes amid an immigration influx, seems exceptionally relevant today as issues of prejudice and social injustice against ‘the other’ dominate the media landscape. I’m very much looking forward to Peter Flynn’s interpretation of the musical, and celebrating the sound of an incredible fully local cast,” Tetreault continued. “Similarly, it will be a joy to again welcome Edward Gero and many others in our A Christmas Carol cast for our 35th-annual production.”

Tetreault also announced that Ford’s Theatre is committing to a new initiative that will offer more than 2,000 free performance tickets to mainstage productions in the 2016-2017 season. The Theatre will offer free preview performances of Come From Away, Virginia Woolf and Ragtime and at least 100 free tickets to A Christmas Carol. The initiative seeks to remove price barriers and build audiences in a more inclusive way, by inviting those who live and work in the Washington community who might not otherwise consider participation in the arts.  K Street Magazine will have more details on this — and how you can take advantage — coming up this summer. 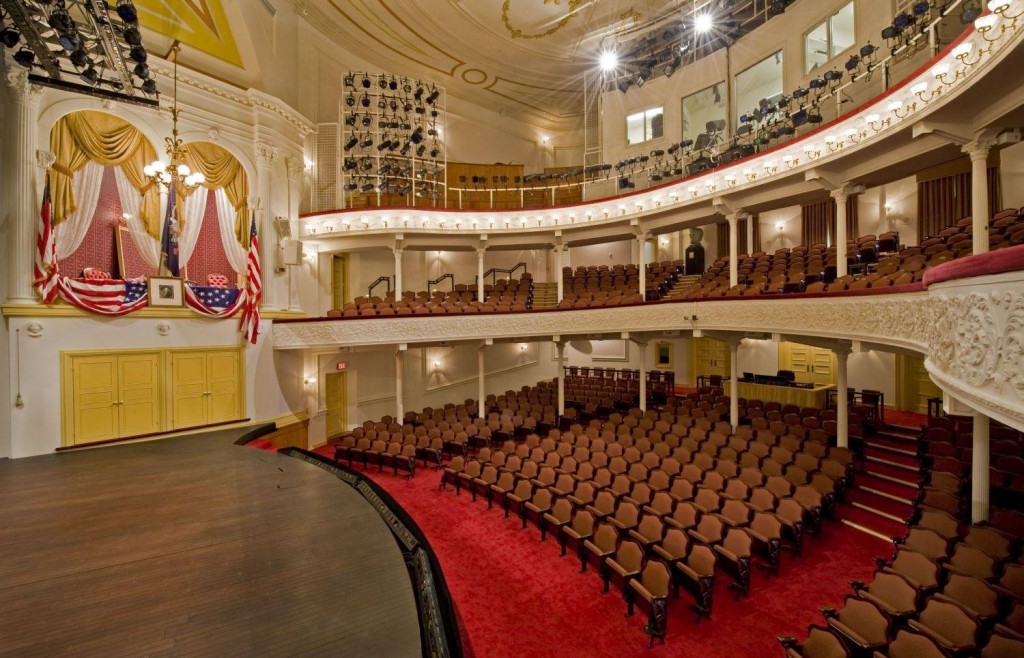 Tickets for Come From Away will be available to Ford’s Theatre Members and Groups (of 15 or more) on May 2, 2016. Public sale for Come From Away is May 9, 2016. Performances of A Christmas Carol, Who’s Afraid of Virginia Woolf?, Ragtime and Mark Russell will be announced at a later date.

Book, Music and Lyrics by David Hein and Irene Sankoff

“A superb new show! A moving, thoroughly entertaining tribute to the indomitable human

Fresh off sold-out runs in Seattle and San Diego, the new musical Come From Away tells the heart-warming true story of how, on September 11th, 38 planes with 6,579 passengers were stranded in a remote town in Newfoundland. The locals opened their hearts and homes, hosting this international community of strangers for a week – spurring unexpected camaraderie in extraordinary circumstances. Featuring a rousing propulsive score, Come From Away honors the better angels of our nature, revealing hope and humanity in a time of darkness. The production marks the Ford’s debut of Tony Award-nominated director Christopher Ashley. See this hit musical prior to its Broadway engagement!

Piano-playing political satirist Mark Russell returns to Ford’s Theatre for one night only, Monday, September 19. With impeccable timing, twinkling eyes and shock-of-recognition insights into American politics, Russell draws materials from the pomposity of public life. Long before Jon Stewart and Stephen Colbert, there was Mark Russell, daring to joke and sing of the often absurd political processes. Russell’s unique brand of comedy earned him the Mark Twain Award for political comedy and has made him a popular favorite on PBS.

A holiday tradition for 35 years!

Join the ghosts of Christmas Past, Present and Future as they lead the miserly Ebenezer Scrooge on a journey of transformation and redemption. Originally conceived by Michael Baron, this music-infused production captures the magic and joy of Dickens’s Yuletide classic. Acclaimed Washington stage actor Edward Gero returns for to play Scrooge in a production The Washington Post proclaims “musically high-spirited” and “infectiously jolly.”

Fifty-five years since its New York premiere, Ford’s Theatre presents Edward Albee’s classic Who’s Afraid of Virginia Woolf? George and Martha invite Nick and Honey to their home after a faculty party. What awaits their late-night guests is not a welcoming nightcap but tempestuous verbal sparring fueled by alcohol and 20 years of marital dysfunction. Filled with acerbic wit, Albee’s play is both wildly funny and heart-wrenching, exposing the fears and secrets of both couples as the lines between reality and illusion blur. Aaron Posner directs and Holly Twyford stars as Martha in the masterpiece that The New York Times asserts established Albee as “… the most important American playwright of his generation and set a brave new standard for truth-telling.”

Based on the Novel Ragtime by E.L. Doctorow

Based on E.L. Doctorow’s celebrated novel, this epic Tony-winning musical depicts three families striving for the American dream at the turn of the 20th century. As the country balances on the cusp of social change, the lives of a wealthy white family, a daring Harlem musician and a determined Jewish immigrant intersect—and their fates are inextricably bound and profoundly changed. With an expansive musical score, striking relevancy and a who’s who of 20th-century historical characters, Ragtime confronts both the unbridled optimism and the stark reality of life, liberty, and the pursuit of happiness. Peter Flynn (1776, The 25th Annual Putnam County Spelling Bee) directs an all-star D.C. cast including Kevin McAllister, Tracy Lynn Olivera, Nova Y. Payton and Jonathan Atkinson.

Learn about Lincoln’s assassination from two men who were there. This 35-minute play at Ford’s Theatre explores the key facts of the assassination while capturing the emotions of that fateful night in 1865, as told through the eyewitness accounts of actor Harry Hawk and Ford’s Theatre co-owner Harry Ford, among others. As they reconstruct the sequence of events, they grapple with the question: Could John Wilkes Booth have been stopped? One Destiny was honored with The Washington Post Award for Innovative Leadership in the Theatre Community in 2011, and celebrates its 1,000th performance in spring 2016. Performance dates and times for spring 2017 to be announced.

Join Detective McDevitt as he re-visits and re-examines the sites and clues surrounding the assassination of our nation’s 16th president. This outdoor tour lasts approximately two hours and makes at least eight stops. The distance walked is 1.6 miles from outside of Ford’s Theatre to the White House. Please wear comfortable shoes.