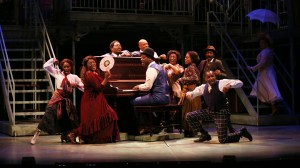 Aptly, given the energetic, even fitful nature of ragtime music (Wikipedia calls it “syncopated”), Ragtime the musical– now playing at Ford’s Theatre— offers an energetic, fitful snapshot of New York at the turn of the century. There’s the wealthy white suburban family, where “Mother” suffers from the ennui that would eventually be described in The Feminine Mystique; Coalhouse Walker Jr., a Black ragtime musician from Harlem with high hopes for his newborn son 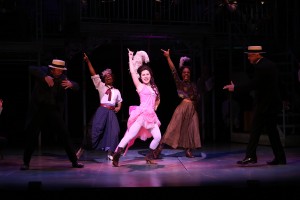 in a post-Emancipation Proclamation America; and Tateh, a Jewish immigrant pursuing the American dream for him and his young, motherless daughter.

But (too) many others vie for attention, too– conservative “Father,” grappling with a fast-changing world; “Younger Brother,” a yuppie looking for a cause; Evelyn Nesbit, a young chorus girl who will do anything for a photo op. Appearances by Harry Houdini, JP Morgan, 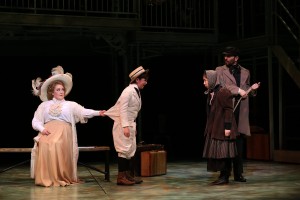 and Henry Ford add historic flavor; but do nothing to advance the plot or emotions. The script is the script, of course; but Ford’s lighting and costume choices add to the melee.

But one thing that stands out (aside from the fantastic music): that history repeats itself. Based on the 1975 novel by E. L. Doctorow– an historic fiction writer– and first produced as a play in 1996, Ragtime manages to hold a mirror up to contemporary America, where race relations and immigration are centerfold. In a violent scene where a 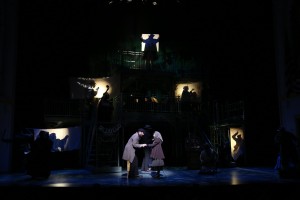 Black woman is beaten by police, one almost expects her to scream, “I can’t breathe.”

To lift words from Ford’s Theatre Society Director Paul R. Tetreault’s welcome note, “the relevancy and urgency of the show’s themes and storylines” are indeed startling.

Previous Post: Golden Triangle Free Summer Film Series
Next Post: Theater Review: Intelligence – We Could All Use Some