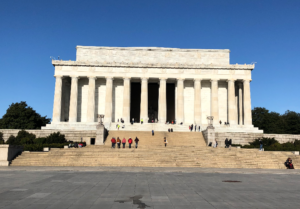 Ford’s Theatre Society will be presenting a one-night concert version of the Tony-nominated musical Come From Away on the steps of the Lincoln Memorial on the eve of the 20th anniversary of September 11th this year.

“There isn’t a more fitting or inspiring location than the Lincoln Memorial to stage this wonderful story that honors the better angels of our human nature,” said Ford’s Theatre Director Paul R. Tetreault.  “On the 20th anniversary of 9/11, we are honored to present this story of courage, communion, and compassion. And we are grateful for the chance to do so in-person, welcoming back audiences to experience the transportive power of live theatre together once again.”

Come From Away tells the remarkable true story of 7,000 stranded passengers on September 11, 2001, and the small town in Newfoundland that welcomed them.

The concert at the Lincoln Memorial marks the return of live performance for Ford’s Theatre and the first time since March 2020 that music from the musical will be performed for a live audience in the United States. Broadway performances of Come From Away resume September 21 at the Gerald Schoenfeld Theatre.

The North American Tour of Come From Away will resume performance on October 5, 2021, in Memphis, TN, visiting 36 cities including a return to Washington, D.C., at the National Theatre in April 2022.