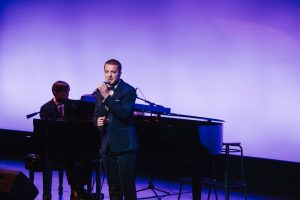 The Tony Award nominee and Broadway veteran headlined the Gala performance, which also featured singer-songwriter Catherine Backus as the opening act. The event, which was set up to support the local theatre, was a lively experience with open bar, live auction, and a much anticipated Broadway star performing songs from some of his previous theater 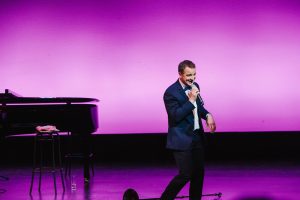 He serenaded the intimate audience with “Stranger in This World” from his early career as “Boy George” in the play Taboo (which he admitted was one of the defining moments in his theatre career).  But now Boy George has grown up to be “King George” in Hamilton. Morton wowed the audience with crowd favorite “You’ll Be Back” — which obviously encouraged a singalong. 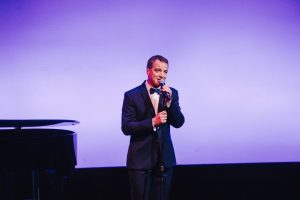 Morton also performed songs from some of his other outstanding works such as “Anthem” from Chess and “We Never Said Goodbye” from Sunset Boulevard, and finished the evening with a beautiful rendition of “Hallelujah” by Jeff Buckley.

For a gala meant to raise money for the theater, the role Euan Morton played as the headlining act with his performance during the evening was undoubtedly Broadway-worthy. It was a night of outstanding music and entertainment which the audience not only enjoyed, but left them feeling proud to support the future of performing theater.