Andy DelGiudice is a freelance event and urban lifestyle photographer based in northwest Washington DC. You can follow him on Twitter @DGDCphotos

Some of music’s biggest names were in Washington Wednesday night.  As usual, this visit had a little bit of advocacy to it — and a lot of artistry as well.

It was the annual Grammys on the Hill Awards, which brought together legendary music producer Clive Davis, songwriters Victoria Shaw, Angela Hunte and “American Idol” judge Kara DioGuardi each to perform one of their own hits and some classics, while cellist Zoë Keating gave her own version of the National Anthem. 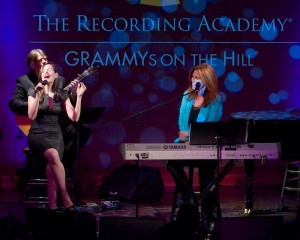 But the night’s biggest nod went to Jennifer Hudson who was being honored with the Recording Artist Coalition Award for her charitable and artistic achievements.

Taking the stage at very the end of the night, Hudson showcased her vocals singing both “Hallelujah” and “One Night Only” from Dreamgirls.

But as an almost final act, several Members of Congress joined the featured songwriters for a rendition of “Be My Baby.”  Why did the professionals let them on stage?  Because they want something from them, of course!  Proceeds from Grammys on the Hill benefit the Grammy Signature Schools Program which fights to keep music education in schools.  Hear that, everyone on the Hill?