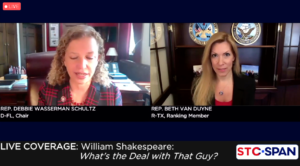 Audiences again enjoyed Shakespeare Theatre Company’s Will on the Hill via Vimeo this year, a venue that offered the company the opportunity to incorporate more policymakers than almost ever before while taking a jab at the technical headaches and hassles of the past 18 months.

Will on the Hill Far Away featured an original script by Nat Cassidy, directed by Samantha Wyer Bello, and audio/video edited by Gordon Nimmo-Smith that plays on the gambles and glory of the continuing trend toward all-things tech (with some other harshness of our present-day realities playing pretty prominently as well).

In true form, politicians in Will on the Hill Far Away can’t agree on much — including which of the Bard’s plays was his best. So a hearing is convened to discover more about the man and his musings. But things go wrong when the hearing gets hacked by a not-so-mad scientist with an invention to revolution education with “immersive learning”… or do they? 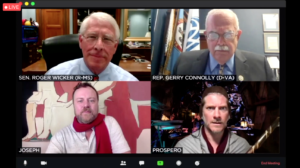 Instead of bringing historic and literary figures into the modern-day, politicians glitch into the world of Shakespeare, complete with its villains, sprites… and that one bear that famously exits in pursuit in Act III of The Winter’s Tale!

In a silly adventure that curiously incorporates some of Shakespeare’s lesser-known, yet ever-important characters, the audience is able to poke fun at policy (including gems like this line: “Gotta pass the bill before you know what’s in it, right?”) and realize that neither world — either Shakespeare’s fictional and frenzied fun or our very real and troubled times over 2020 and beyond — are easy to navigate.

All’s well that ends well, though! This year’s Will on the Hill raised over $300,000 to support STC’s arts and education community engagement programs. The link to watch and support remains available through Thursday, June 10 at 11:59PM.