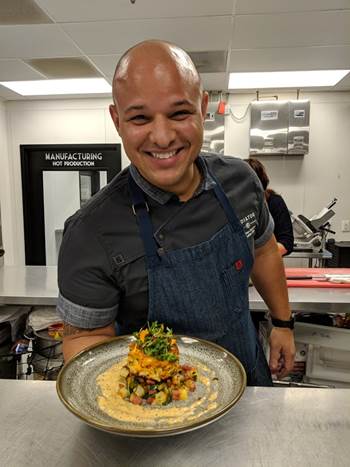 Radiator’s Executive Chef Jonathan Dearden will advance to a national chef competition on ABC’s The Chew after being named DC’s “Best Chef on the Block” in the final round of a contest held by DC Refined.  Next month, Chef Dearden will represent the Nation’s Capital against five other regional winners.

To triumph in the contest Chef  competed in a live cook-off to make a dish that “best represented Washington, D.C.” Raised in Sterling, Virginia, Radiator’s executive chef incorporated familiar flavors of his hometown with a Chesapeake crab cake, accompanied by a half-smoke and potato-apple hash, and finished with an Old Bay remoulade.

“There’s an element from each region – Chesapeake crab cake for Maryland, half-smoke for DC, and potatoes and apples from local Virginia farms. The Old Bay remoulade brings all of the elements together. The remoulade is like the 495 Capital Beltway of the dish,” said Chef.

A panel of judges selected Chef Jonathan’s dish based on taste (75%) and presentation (25%). His winning dish earned him a spot to compete in New York City at the national chef competition on ABC’s “The Chew” as DC’s representative. The air date for this special episode is yet to be announced.

Previous Post: 11 Things That Go Through Your Mind During Your First Float Therapy
Next Post: Paradiso Now Has Pizza… And a Play Room