The United States Institute of Peace, directly across the street from the U.S. Department of State  in northwest DC, served as the perfect backdrop for the series premiere of CBS and Revelations Entertainment’s “Madam Secretary” Thursday night.

The cast and producers of “Madam Secretary” graced the carpet, including executive producers Morgan Freeman, Lori McCreary, and creator 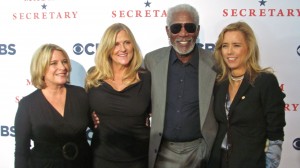 After a 16-year role as “mom” and taking a break from television, Téa Leoni returns to the small screen playing both a mother and the newly appointed Secretary of State in “Madam Secretary.”

“Once I put all the pins and the heels and the skirts and the pants, in the blender, there’s nothing left for me to wear. That’s probably been the 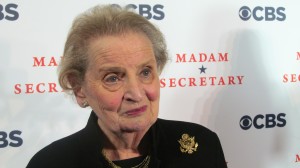 hardest thing,” Téa Leoni explained about her character’s look being compared to former Secretaries of State Albright, Rice and Clinton. “How am I going to dress to not be associated?”

Madam Secretary is set to become a show that not just Washingtonians will love and binge watch, much like The West Wing.

“Earlier this year I got the script for Madam Secretary and before I was even involved in any way I just fell in love with the script as a TV show that I would become obsessed with and want to watch,” said Erich Bergen who plays Blake Moran, and is a self-proclaimed news junkie. “To me it’s no different from any workplace drama; it just happens to take place in Washington, D.C.” 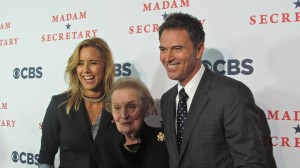 including the creation of “their lady” in Madam Secretary.

“Now personally, I’ve always been under the spell of females, that’s just me talking. I was raised by a few, not just one. There were a few: mothers and grandmothers and great-aunts and stuff like that. So I believe in strong roles for women,” said Freeman.

“So when Lori [McCreary], Tracy [Mercer] and I met with Nina Tassler and spoke about Revelation’s ideas, we asked the question: what if we developed a show around another strong female, but what if this one was Secretary of State?” Freeman continued, “It wasn’t too hard to imagine, because we’ve had these wonderful three lady secretaries of state, so it wasn’t a hard sell at all.”

See the diplomacy of “Madam Secretary” firsthand when the series premieres this Sunday, September 21st at 8/7c on CBS.