Thursday night, José Andrés became the first Chef in Hispanic Heritage Awards history to be recognized.  Lauded for his outstanding achievements and leadership in promoting Latino heritage, the accolade is one of the highest honors “for Latinos by Latinos.” 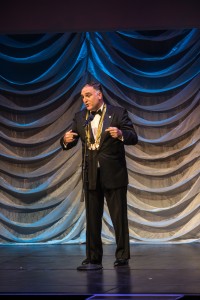 beyond his parameters, through art and design.

“When we think of fine cuisine, elegance and sublime flavors come to mind.  We never think of design.  Well, that’s not the case with José Andrés,” said Cuban-American actor Yul Vazquez, who presented the award. “He’s taken the labor of a chef to a new level.  In the process, he created a new style of cooking and a new way to help the world.”

Andés said “I am humbled and very excited to learn this is the first time a chef receives such an award and to know that we are doing great things to nurture our culture and traditions through our gastronomy.”

The Hispanic Heritage Awards will be broadcast on Mundo FOX on Sunday, September 15, 2013 at 6 PM.