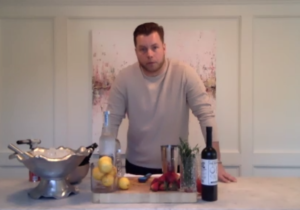 Call it a not so ‘dry’ run.  As virtual events are starting to take place of physical ones — and restaurants and bars are getting crafty when it comes to selling cuisine and cocktails — Washingtonian Magazine held it’s first online Happy Hour get-together Thursday evening.

Attendees were forewarned that they would be making Chaplin’s famous “The Cure” cocktail and were able to purchase kits to make the cocktail in advance. But there were some additional surprises.

Both Wilder and Farquhar showcased their own at-home go-to cocktails during quarantine, and Farquhar showed how to make hers as well.  (Spoiler: It was made with Belvedere, and it was the easiest of the night.) 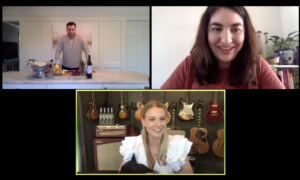 “People that really hadn’t had an interest in making cocktails at home are now getting into it,” said Farquhar. “They’re approaching it more like cooking, finding things in their fridge that are going into drinks.” She popped out a lemon and a shaker to make the super simple Belvedere Air — just Belvedere vodka and lemon juice.

Wilder, who admitted that he’s personally drinking a lot of Tom Collins at this moment, gave the secret recipe for ‘The Cure,’ the most popular draft cocktail from Chaplin’s. But he probably doesn’t have to worry about sales in the future… besides Belvedere, pisco, lemon juice, wine, and a champagne topper, this one also requires some harder to find ingredients — and odds are Washingtonians don’t keep lime leaf syrup in the cupboard.

Don’t worry though, you can still get ‘The Cure’ — and more — to-go at Chaplin’s.  Restaurants around the city have been liquidating their inventory at cost and trying takeout to keep business going.

“I was tempted to start selling furniture, but we’re going to need that,” said Wilder. (You could almost see him say a little prayer that that, indeed, would be true.)  “In the meantime, we love being able to offer people’s favorite cocktails to go.”

You can order from Chaplin’s online or through the Caviar app. Make sure to pick up a bottle of wine or champagne, currently 50% off. Click here to order.