Round House Theatre is bringing together DC-area playwrights, actors, and designers for Homebound, 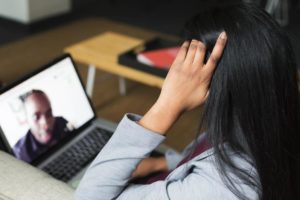 an original webseries that explores life under Stay-at-Home orders in the Nation’s Capital. The ten-episode series premieres on Monday, April 27, 2020, with new episodes posted on the Round House YouTube page every Monday through June 29, 2020.

Homebound is like the Pass the Story game writ large in the digital age. It will unfold as a chain story, with a new playwright assigned each week to write a scene that continues the previous episode.

Each scene will be written for two actors, who will film themselves separately from home after rehearsing under the remote direction of Round House Artistic Director Ryan Rilette and Associate Artistic Director Nicole A. Watson. Rilette and Watson both recently received Helen Hayes nominations for Outstanding Direction in a Play for The Curious Incident of the Dog in the Night-Time and School Girls; Or The African Mean Girls Play, respectively.

“We are launching Homebound in order to address two very important issues,” Rilette explains. “First, we believe that art must play an important role in helping us to process the incredible moment we’re living through. Second, we care greatly about the artists who lost work as a result of the cancellations of theatres across the nation, and we wanted to put to work the local actors who lost paychecks as a result of our closures…”

“We can’t create live theatre right now—and of course nothing can replace it,” Rilette adds, “but we hope our audience will enjoy seeing some of their favorite local artists creating new work virtually.”

Homebound is part of Round House at Your House, a new slate of free digital programming offered by the theatre that also includes weekly livestreamed interviews with celebrated playwrights, Theatre Education Challenges for three different age groups, and cocktail-making classes from Round House’s Fourth Wall Bar & Café highlighting local products.